Fragments are snippets or loose leaves from a manuscript, which were often used for different purposes. Since parchment is a more durable material than paper, the fragments we find nowadays are most often from parchment manuscripts. These leaves may for example be found as loose leaves in a manuscript, as book covers or recycled into entirely different objects. Original manuscripts for these fragments have been attempted to be reconstructed by putting together the related fragments, at times with more success than at others.

This fragmentary manuscript contains parts of the Strengleikar, a translation of the French lais of Marie de France. The text is written in two columns and is from the 13th century. The fragment was found by Árni Magnússon inside a bishop's mitre.

The fragment AM 748 I a 4to from around 1300 contains five mythological poems from the Poetic Edda. One of the poems is Baldrs draumar (Balder's Dreams), which is preserved in this manuscript only.

AM 79 8vo contains fragments of manuscripts from the 14th and 16th century. Its contents vary from law texts to religious texts, among which one finds the legend Legenda Aurea from the 15th century. 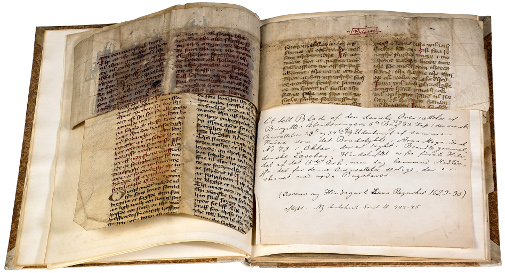 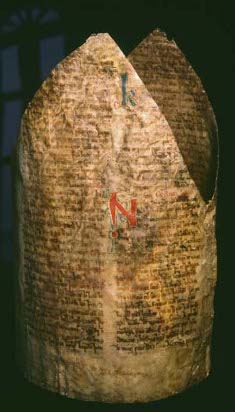 AM 666 b 4to is a manuscript fragment that has been turned into a bishop's mitre. It contains passages of the Norwegian Strengleikar (Stringed instruments) - versed translations of the French Lais de Marie de France.

Click on the picture to open the bishop's mitre, or see a picture against the light to see the holes in the parchment after the mitre was embroidered.