A sensational discovery: Fragment of lost Norwegian royal charter from circa 1205 rediscovered in old book cover

A unique parchment fragment was recently discovered at The Arnamagnæan Institute. During the restoration of the binding of one of Árni Magnússon’s Danish law manuscripts, conservator Natasha Fazlic found three related strips of parchment that contain a text in Old Norwegian. 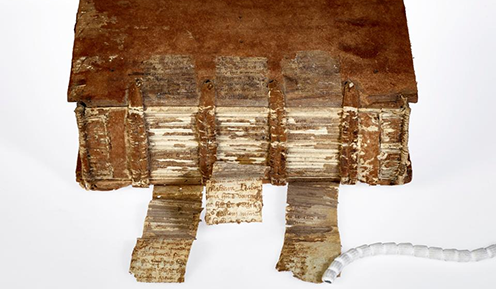 Fragment of Norwegian royal charters in the binding of a Danish law manuscript. Photo: Suzanne Reitz, The Arnamagnæan Institute.

After Natasha Fazlic had treated and pieced the fragment together and Suzanne Reitz had photographed it, three researchers from the Collection, Alex Speed Kjeldsen, Beeke Stegmann and Gottskálk Jensson, could read the preserved part of the text. A provisional transcription and analysis of the fragment has recently been published in Gripla XVII (2016). The transcription has first and foremost been done by Alex Speed Kjeldsen. Gottskálk Jensson has carried out the historical analysis, identification and dating and has been able to conclude that the fragment is a copy of two or three Norwegian royal charters from circa 1205, which were otherwise thought to have been lost. Beeke Stegmann and Natasha Fazlic made the physical description and dating of the cover. A more in-depth examination is being conducted and will be published in Opuscula XVI (spring 2018).