Manuscripts and their production

Our word 'book' is related to the word 'beech' (Old Norse 'bók'). It is a direct translation of the latin 'codex', which means 'tree trunk', and may be revealing of the fact that wooden boards were previously used as writing material. A manuscript shaped as a book is also called a 'codex'.

Christianity brought the written culture to the North and with it a new alphabet and a new language: Latin. Before this, writing was limited to the carving of runes on wood, stone or metal in Old Norse. The first manuscripts were written in the so-called 'bókmál' ('language of books') which was then the term used for the Latin language. In the 12th and 13th centuries, the books began to be written in the popular languages: Old Norwegian, Old Icelandic, Old Swedish and Old Danish.

Written objects as written pages bound together and protected by a binding have been used since the 3rd and 4th centuries. Before this, the writing was done on wax tablets (in Latin: 'tabula cerata') or scrolls ('rotulus'). Each and every handwritten book is a unique artefact. Since books were produced individually, books can be very different from each other, either in the texts they contain or in their production techniques.

See a chronological development of book production in the North.

The scheme below shows the numbers of manuscripts preserved in the North divided by country and time. 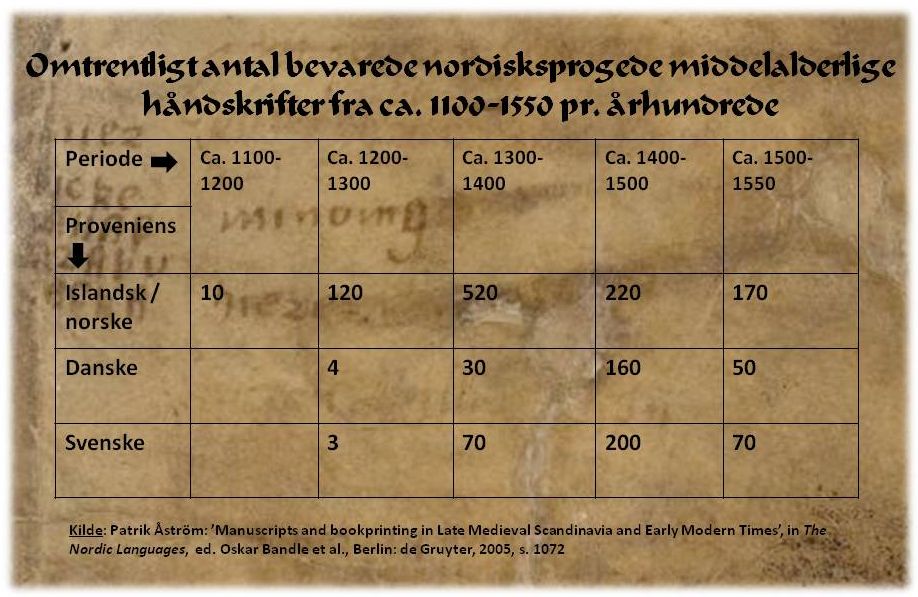 Read about the book production in the Middle Ages on Denmark's virtual book museum.