The Latin alphabet reached the North through Christianity. The manuscripts preserved from the oldest period of the written culture in the North, from the middle of the 11th century to the middle of the 13th century, are written in Carolingian script. During the 13th century, the Carolingian script was replaced by the Gothic script, which prevailed until the middle of the 16th century. The script called Gothic textualis then lived on as the first printed typeface (fraktur), while the Gothic cursiva variant developed into a script called kurrent, which itself was repaced by the Humanist minuscule in the 19th century.

Carolingian minuscule was introduced during the reign of Charlemagne (768-814) in the Frankish kingdom and later spread to the North. This type of script is characterised by broad and round letters and, in the earliest times, few abbreviations and ligatures. This script is mainly found in manuscripts written in Latin, for example the Dalby Book (GKS 1325 4to) from the second half of the 11th century. The book contains the four Gospels and is possibly the oldest book preserved that was produced in the Nordic region. 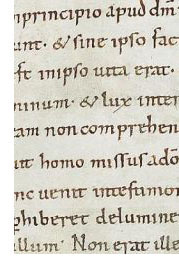 A further development of the Carolingian script took place in Norway and Iceland. This type of script has been called Insular Carolingian because of its characteristically English (insular) shapes of the letters <f> and <v>. The Norwegian Homily Book (AM 619 4to), a collection of sermons translated from Latin, from the beginning of the 13th century is the oldest preserved book written in Norwegian. 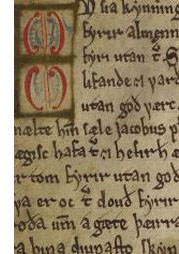 Gothic script is characterised by its angularity. Abbreviations and ligatures are widely used. Letters such as <i> <u> <m> and <n> are all written with identical shafts (vertical lines), making it difficult to distinguish them from each other.

An example of the older version of Gothic Textualis can be found in the Scanian Church Law (AM 37 4to) from the second half of the 13th century.

Younger Gothic Textualis can be seen in the leechbook AM 187 8vo. The script, dated to the beginning of the 15th century, is sharp and angular with forked shafts on the ascenders. The scribe of this particular manuscript has a unique way of writing <ø> and <æ>. 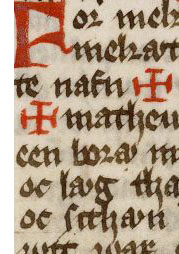 Around the middle of the 15th century, Gothic Textualis was gradually replaced by Gothic Hybrida, a combination of Textualis and Cursiva. This development is attributed to a middle class that required a new script that was faster and easier to write than Textualis.

From the middle of the 13th century, a more flowing script written with a sharp pen started to develop, being faster and easier to write than Textualis, which required a thick pen. The letters are interlinked with extensions below the baseline and beginning and finishing strokes. 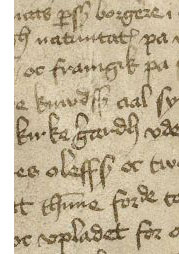 Neogothic Cursiva developed in Germany and arrived in Denmark with the Reformation. The letters have similar traits and are written in a single stroke. 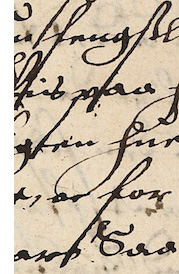 Latin Minuscule developed in Italy during the Renaissance. It was based on Carolingian Minuscule. The script has two main variants: Textualis and Cursiva. The script is also called 'Humanist' since its development occurred alongside the scholarly workds during the Humanist movement in the Renaissance. When this script is used in a book, either handwritten or printed, it is often called antiqua. Humanist script reached the North during the Reformation. Poul Helgesen's historical work Chronicon Skibyense ('Skiby Chronicle', AM 858 4to), written around 1534, is an example of this script. 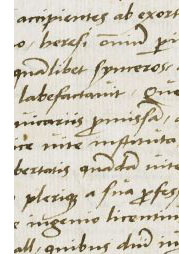 Letters written together (ligatures): If writing space was lacking, several letters could be written together as one. The letter æ is originally a ligature of a and e, just as the symbol & is a fusion of e and t (et = and).

The letters s and t are written together in 'þionasto'.

Abbreviations: Abbreviations are also used to save space. There are various types of abbreviations. Suspension is when the beginning of a word is written and the rest is signalled with a period. Contraction is when the beginning and the ending of a word are written. Symbols or letters can be written above the abbreviated word. These are called superscript letters. A very common one among these is the nasal line, a horizontal line written above a letter which signals a following n or m (nasals).

Ok er lokit var bardaganom (And when the battle was over)

The word 'er' is here abbreviated with a wave-like mark and 'var' with a superscript r. A nasal line has been written over the last -o to signal an m.