Manuscripts are called miscellanies when they contain texts of various genres by several different authors and written by one or more scribes. This may be a single manuscript or several parts put together in a single box or binding. Composite manuscripts often contain texts in prose, for example religious, medicinal or encyclopedic texts, and the script is often cursive or half-cursive. These manuscripts, produced for private audiences, are most often in smaller formats such as octavo or quarto.

AM 226 fol. Miscellany with the Old Testament and several translated sagas from the middle of the 14th century

AM 226 fol. is an Icelandic miscellany that contains texts with events taken from the Old Testament and from classical antiquity. Stjórn, an edited Bible history from the Old Testament in Old Norwegian, occupies most of the manuscript (f. 1r-110r). The rest of the manuscript contains a history of the Romans, Rómverja sögur (f. 110r-129r), Alexanders saga (f. 129r-146v) and a history of the Jews, Gyðinga saga (f. 146v-158r). Click on the picture to turn the pages in the manuscript AM 226 fol.

AM 76 8vo. Miscellany from the last part of the 15th century with Lucidarius and other texts

AM 76 8vo from around 1470-1500 contains among other texts the Lucidarius in Old Danish, a medieval encyclopedia written as a dialogue, the apocryphal Gospel of Pseudo-Matthew, the Infancy Gospel of Thomas in Latin, and psalms and poems written in Latin and Danish with musical notes. 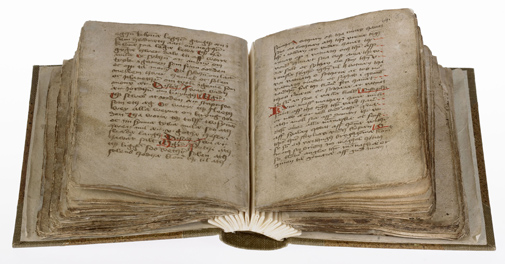 AM 188 8vo. Miscellany from the 16th century with astrological texts and medicinal advice

AM 188 8vo is a miscellany from the first half of the 16th century. The manuscript contains a calendar, astrological texts, Formulae epistolarum (Epistole Caroli), which is a guide in Latin on how to write letters and medicinal advice for humans and animals alike in Danish and Low German. Click on the picture to turn the pages in the manuscript AM 188 8vo or see pictures of its restoration.