Chronicle of the Slavs in the Arnamangæan Collection

While the twelfth century is generally associated with great social, political and economic transformations and cultural development in Western Europe, there was one area of Medieval Europe which did not fit the general scheme. This area, called Połabie was inhabited by Polabian tribes, who resisted influences from their neighbours and remained pagan well into the twelfth century. The area was an object of intense political interest for three powerful neighbours, which manifested itself in numerous attempts to Christianize the region. The Christianization of the Polabian tribes is described in, among other sources, the Chronica Slavonorum, which is preserved in AM 30 fol.

Many treasures of European culture are preserved in the Arnamagnæan Collection in Copenhagen, from Dutch medieval books of hours, through Spanish scholarly commentaries on classical works, to the oldest fragments of Old Norse poetry. This month we bring you one of the important works of European historiography, a twelfth-century chronicle, which is preserved in a fifteenth-century manuscript in our collection: AM 30 fol.

Christianization of the Polabian Slavs

While the twelfth century is generally associated with great social, political and economic transformations and cultural development in Western Europe, often called the twelfth-century renaissance, there was one area of Medieval Europe which did not fit the general scheme. This area, called Połabie in Polish or Elbeland in German, is located to the west of the Odra river, east of the Elbe river and south of the Baltic sea, and was inhabited by Polabian tribes, who resisted influences from their neighbours and remained pagan well into the twelfth century. The area was an object of intense political interest for three powerful neighbours, the Kingdom of Denmark from the North, the Kingdom of Poland from the East and the Kingdom of Germany from the West, an interest which manifested itself in numerous attempts to Christianize the region. The Christianization of the Polabian tribes is described in, among other sources, the Chronica Slavonorum, which is preserved in AM 30 fol.

It is believed that the author, Helmold of Bosau, wrote his chronicle around the time of the death of Gerold, bishop of Oldenburg, in 1163, and the birth of Matilda of Saxony in 1172. Helmold’s chronicle is an important source for the history of the Polabian Slavs, as well as of the socio-political situation in the Baltic region in the twelfth century. In the chronicle we can read for example how Nordic raids in the Baltic disturbed the Christianization missions in the area:

The work of imbuing the Slavic peoples and other heathens with the faith was in truth from the very beginning seriously interfered with by that tempest of wars that the turbulent Northmen brought upon almost the whole world. The hosts of the Northmen were recruited from the bravest of the Danes, Swedes, and Norwegians (Helmold, transl. F. J. Tschan 1966, pp. 61-2)

AM 30 fol. is a paper manuscript in folio format comprising 56 leaves gathered into five quires of six conjoint leaves each, with the exception of the last quire, with consists of four conjoint leaves only. The whole codex is made of one type of relatively thick laid paper with a "bull's head" watermark. This watermark is fairly common in medieval manuscripts, especially German ones, but it also appears in Scandinavian artefacts, such as for example AM 76 8vo (Olrik Frederiksen et al. 2008). A similar watermark can be found in Piccard's catalogue, type VII, see an example here.

AM 30 fol. contains two main texts dealing with the Christianization of the Slavs. The first is the Chronica Slavorum by Helmold of Bosau, which describes the Christianization of Polabian Slavs from the times of Charlemagne until 1170. The second is Arnold of Lübeck's Chronica Slavorum, which is a continuation of Helmold’s work and describes events from 1171 until 1209. AM 30 fol. does not preserve the entire text of Arnold's chronicle, however, but only the first nine chapters of its first book. Chapters of both chronicles are listed continuously in the table of contents on f. 1v. It should be emphasized that the sudden end of the text of Arnold's chronicle is not a result of damage, as it ends on f. 55r with a colophon that reads "queritur finis hujus opusculi anno 1472" (exclaims the end of this work in the year 1472). These two main texts are followed by three short texts on ff. 55v-56r which are most likely later additions made in different hands, and which appear to be excerpts from the chronicle.

Thanks to the aforementioned colophon, the manuscript is dated 1472. It was probably written in the Augustinian priory of Bordesholm in northern Germany, and it is believed to have been registered in 1488 in a catalogue of the library belonging to Augustinian Canons (Schmeidler 1937, p. xix-xx). This catalogue today is held in Kiel University Library with the shelfmark Cod. ms. Bord. 1. It mentions Helmold's chronicle on f. 31r with the reference to shelf “hiii”. The digital facsimile of the catalogue can be found here.

The provenance of AM 30 fol.

It is not known how and when the manuscript made its way to the Arnamagnæan Collection, but already in the copy of the catalogue from 1730, as preserved in AM 477 fol., the manuscript is a part of the collection and is listed as a chronicle by Helmold which starts with a table of contents (AM 477 fol., f. 2v). Today the manuscript is in a library binding, which replaced an earlier parchment binding in 1911. The fragments recovered from the earlier binding are now held in the Accessoria collection as a part of Acc. 7 a α Hs 1. They are fragments of a medieval liturgical book originating in Iceland (Merete Geert Andersen 2008). The previous binding was therefore most likely from the time of Árni Magnússon (1663–1730).

Taking into consideration the assumed origin of the manuscript from the Augustinian priory of Bordesholm we might speculate whether the manuscript's arrival in Danmark had anything to do with Frederick I (1471–1533), formerly Duke of Schleswig and Holstein, becoming the last Catholic king of Denmark in 1523. It is known that Frederick was educated in the convent school in Bordesholm, and his first wife, Anna of Brandenburg (1487 –1514), is buried in the church of the Bordesholm priory, so there is a clear Danish connection (Rasmussen et al. 2008).

The ownership history of this manuscript remains a mystery, but there are a few clues which might help us understand something of the history of this volume. On the first leaf, there is a note which reads “Detur dilecto fratri meo priorj Marquardo Holtzenij Ego Petrus Heyne possessor protestor de [...]” (May this be given to my brother prior Marquardo Holtzenij, I Petrus Heyne, the owner, testify with regard to [...]). Unfortunately, the end of the note has been trimmed, and its last words are difficult to decipher, which leaves us with two names without any context. Therefore, we do not know what Petrus Heyne is testifying about. He appears, however, to be the owner of the manuscript.

It is unknown whether at that time the manuscript had already left the Augustinian library, so Heyne can refer to it as his property and donate it to some other prior by the name of Markvard of Holtzen (?), who also remains unknown to us. The name Petrus Heyne, on the other hand, appears in the records of the university of Rostock, where a student by this name was enrolled in 1497 and graduated in 1509/1510. It is uncertain whether this is the same Petrus Heyne who wrote the note in AM 30 fol., but the hand in which the note is written could easily be a late fifteenth- or early sixteenth-century hand. 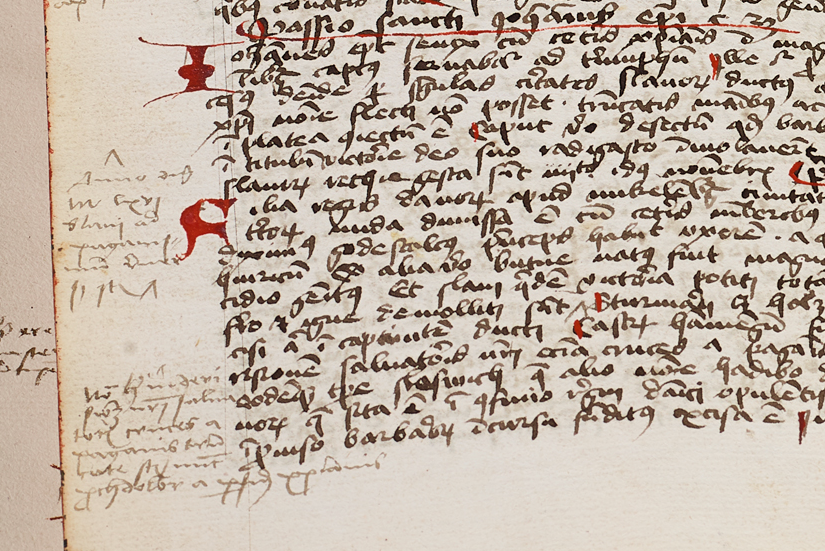 Marginal notes accompanying the beginning of chapter 23 Passio sancti Iohannis episcopi in AM 30 fol., f. 12v. (Click on the image for a larger version.)

Katarzyna Anna Kapitan is research assistant at the Arnamagnæan Institute.