Private books of hours were the European bestseller of the 14th-16th centuries, especially among the aristocracy and urban élite. They typically began with a calendar, which listed saints’ days and other religious holidays, the most important of which were written in red – the so-called “red-letter days”.

AM 71 8vo, fols. 16v-17r. Two miniatures accompany the first prayer, matins, in the Hours of the Virgin. The one on the left depicts Annunciation, when the archangel Gabriel appeared to the Virgin Mary and told her that she would conceive and become the mother of Jesus, the Son of God. The miniature is surrounded by a floral border. Click on the picture to see a larger version.

Private books of hours were the European bestseller of the 14th-16th centuries, especially among the aristocracy and urban élite. They typically began with a calendar, which listed saints’ days and other religious holidays, the most important of which were written in red – the so-called “red-letter days”. Following the calendar were texts used for religious devotion, such as litanies, excerpts from the gospels, and prayers. These could be written either in Latin or the vernacular – Middle Dutch, in the case of AM 71 8vo.

The highlight of AM 71 8vo is the opening devotion, known as the Hours of the Virgin. This liturgical devotion to the Virgin Mary is divided into eight ‘hours’ – eight times of day when a devotion should be read. Each of the hours is themed, telling the story of the birth of Christ and the coronation of the Madonna.

Although matins literally means ‘in the morning’ (Latin matutinus), the first of the hours was actually read in the middle of the night. According to the Rule of St. Benedict from AD 529, the Matin should be read in the eighth hour of the night, 02:00 a.m. After the Second Vatican Council (1962-65) the Matins were renamed ‘Office of Readings’ (officium lectionis), and can now be read at any time of the day.

There could be local variation in the text of the Hours of the Virgin, but most books of hours follow the same standard model. The Matins in AM 71 8vo are typical of Dutch books of hours, in a translation attributed to the fourteenth-century theologian Geert Groote.

The Matins open with two verses from the Psalms of David, read as a call and response.

And my mouth shall declare they praise

Incline unto my aid, O God

Following this, the Gloria Patri was read in unison.

Glory be to the Father and the Son and the Holy Ghost.

As it was in the beginning and now and always and forever without end. Amen.

The Invitatorium, or ‘Call to praise’, comes from Psalm 95 (listed as Psalm 94 in the Vulgate). The response to every verse is part of the Ave Maria.

In the honor of the blessed Virgin Mary

Let us have full-hearted joy for the Lord

Come let us rejoice unto our Lord

let us make joy to God our saviour

let us approach to his presence in confession

and in Psalms let us make joy unto him

For God is a great Lord,

and a great King above all gods

because our Lord repelleth not his people

and he beholdeth the heights of the mountains

A Dutch Prayer Book in Denmark?

Many manuscripts have travelled far from their place of origin, and AM 71 8vo is no exception. There are more Dutch and German prayer books in the Arnamagnæan Collection, many of which were bought at auction in 1726. The collection being sold at auction belonged to the civil servant Frederik Rostgaard (1671-1745) and contained thousands of printed books and manuscripts, including Greek and Hebrew Bibles, chronicles from Antiquity, Nordic laws, and more. Among Danish rarities were two printed books by Gotfred of Ghemen: Den Danske Riim-Krønicke (Danish Rhymed Chronicle, 1495) and Selandske Lov (Zealand Law, 1505). 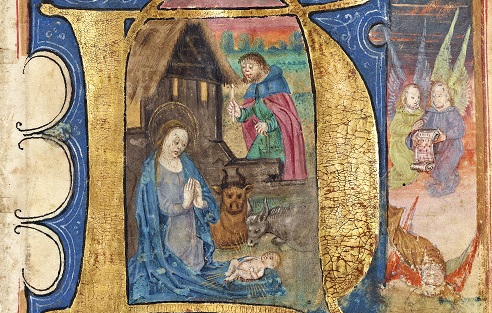 AM 71 8vo, fol. 17r. On the right there is a historiated initial H with a depiction of the infant Christ in the manger. In the border the angels of the Lord can be seen announcing the birth of the saviour to the shepherds watching their flocks, as described in the Gospel of St. Luke, 2.1-20. Click on the picture to see a larger version.

Anne Mette Hansen is associate professor at the Arnamagnæan Collection.

Seán Vrieland is a PhD fellow at the Arnamagnæan Collection.