AM 673 b 4to: The Oldest manuscript of medieval Scandinavia's most prolific poetic form

20 September is the feast of St. Eustace in the Western Christian calendar and this month’s manuscript commemorates the saint in poetic form, namely the so-called Plácitusdrápa (‘poem with refrains about Placidus (St. Eustace)’).

The legend of Eustace recounts how a general named Placidus, in the service of the Roman Emperor Trajan, sees a vision of the crucifix between the antlers of a stag (a motif which has found its way into many cultural artefacts including the label for Jägermeister). The stag tells him to return with his family the next day to be baptised, and he is christened Eustace. He then goes through a series of ordeals: he loses his possessions and flees with his family, and then his wife is taken by a ship’s captain. While attempting to carry his sons over a river, one is taken by a lion and the other by a wolf. After fifteen years working as a he is found by former guards seeking him out on the orders of Trajan. He returns to Rome and pursues a military campaign coincidentally to the place where his wife and sons have been living, unknown to each other. The family end up recognising each other and are reunited. Placidus/Eustace returns to Rome victorious and with his family, but the new emperor, Hadrian, asks him to make sacrifices to the pagan gods for his success. When he refuses, he and his family are martyred.

The cult and legend of Eustace very popular throughout the Middle Ages. This can be seen in Norway and Iceland where he was the subject of four prose versions of his life in addition to the poetic one in this manuscript. In the Norse lives, the saint was more commonly known by his name prior to conversion, namely Placidus.

The poem is in the drápa form, that is, a long poem with refrains. The diction of the poem preserves traditional pre-Christian motifs in its kennings such as -Þróttr ‘elk-Þróttr (Óðinn) of the wave’ (stanza 7), i.e. the Óðinn of the wave-elk (ship) — that is, man — here referring to the Christian Eustace. It also includes a number of kenning types that emerged in the 12th century for describing Christian phenomena such as God, heaven and holy man or saint. 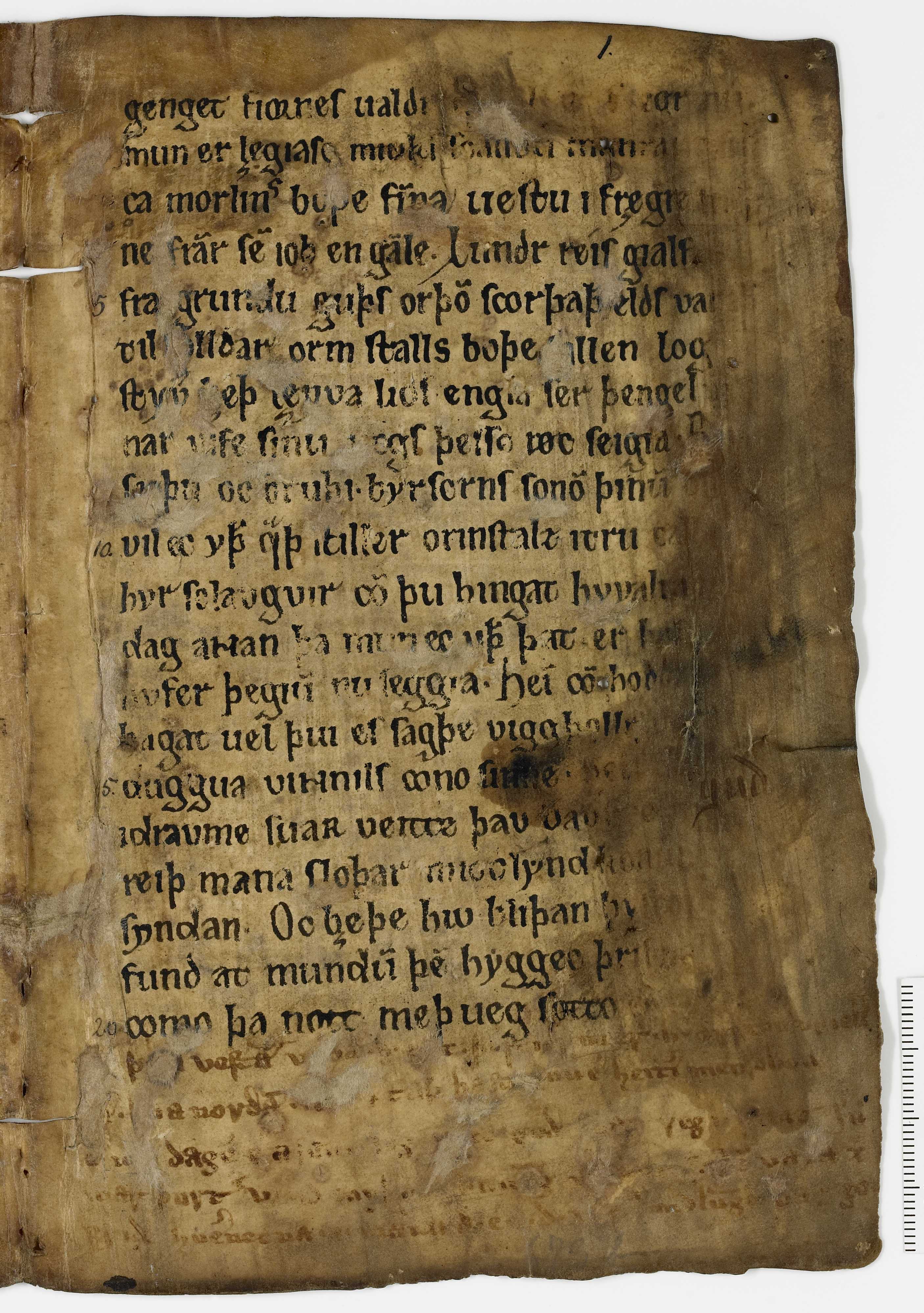 This manuscript itself is from the end of the 12th century, a period when Icelandic manuscript writing in the vernacular was still in its infancy. According to it is likely to have been part of a larger compilation that probably included AM 673 a II 4to, which includes fragments of the Icelandic Physiologus as well as two sermons. The manuscript shows features that indicate it is a copy of an earlier manuscript, but the poem shows influence from two mid-12th century Christian poems, Geisli and Harmsól, which suggests the poem is from the latter part of the 12th century.

Plácitusdrápa is composed in the dróttkvætt metre, which is the metre most extensively preserved from the Nordic countries prior to c. 1400. Although we have very strong linguistic evidence to show that dróttkvætt poetry was being composed from the ninth century onwards, its material preservation in writing is very rare before the thirteenth century. This makes AM 673 b 4to a very important item in our understanding of early dróttkvætt poetry. It is the oldest manuscript containing this metrical form and there are only two or three runic inscriptions containing dróttkvætt which may be older. These the stone at Karlevi, Öland, Sweden (Öl 1 - 8 dróttkvætt lines) from the 11th century; a metal box from Sigtuna (U Fv1912;8 - 2 dróttkvætt lines) also from the 11th century; and possibly an inscription in the stave church at Urnes, Norway (N 319 - 2 dróttkvætt lines) from the end of the 12th century. This month’s manuscript is older than the many dróttkvætt runic inscriptions from Bryggen in Bergen and elsewhere in urban Norway. The manuscript is certainly the oldest object which contains more than a single stanza in dróttkvætt, and it is also extremely early for a manuscript to contain a long unbroken sequence of dróttkvætt poetry (59 stanzas including 469 verse lines), with such poetry preserved normally piecemeal in prose texts until centuries later.

The preservation of the manuscript indicates that at least one leaf has been lost from the beginning and end of the surviving material. This combined with the formal structure of the drápa form means that we can calculate that 11 stanzas are missing from the beginning and 8 from the end of the poem (originally 78 stanzas). Of the leaves that do survive, there is extensive damage including worn text and numerous small holes.

Sveinbjörn Egilsson published an edition in 1833 of the poem for the school in Bessastaðir, based on transcriptions by Þorsteinn Helgason (included as part of the edition) and Halldór Einarsson (included as variants). Finnur Jónsson edited it again in 1887 with a diplomatic transcription. Finnur was apparently able to read a large number of that the earlier transcribers were not able to distinguish, and which subsequent transcribers have also not been able to make out. I undertook in 2007 an attempt to read the illegible letters using the Collection’s multispectral scanner with the help of Tereza Lansing. We were unable to distinguish any of the letters previously visible only to Finnur, and it may well be that the methods Finnur used to read the manuscript were destructive, for example, treating the pages with distilled water, which have rendered it illegible even with the use of the most modern technology. The illegible areas show distinct signs of having been washed away.

The 2007 edition, translation and commentary on the poem is available with open access at http://skaldic.abdn.ac.uk/m.php?p=text&i=1039