The term "marginalia" refers to drawings, squiggles and more in the empty borders around the text. They may be date from the same time the text was written down or added by later users. Marginalia may stand in direct relation to the text's content or be entirely random additions. 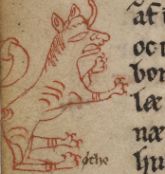 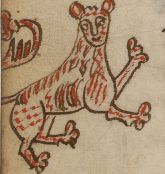 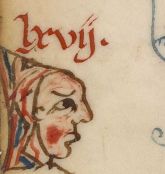 A collection of female legends in Icelandic from around 1500. Also known as Kirkjubæjarbók (the book from Kirkeby). 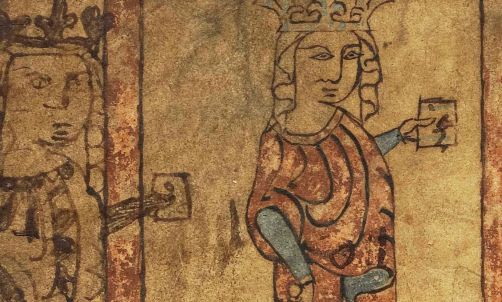 A primer from around 1350 with several didactic texts, such as one on the art of poetry and grammatical treatises. Also known as "Codex Wormianus". 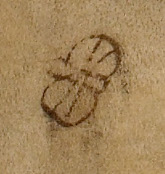 AM 595 a-b 4to from between 1325-1350 contains many drawings in the margins, especially at the bottom of the pages. Some of the illustrations are contemporary with the text, while other are added by readers from the 17th century.

A metatextual reference in the text: A man swallows the letter s in the word "skaut" (shot) - or spits it out - at the same time as he points at it with his left hand. He uses his right hand to point at the word "braut" (away), thus showing that the two words rhyme (internal rhyme).

A later user copied on the right the head of the character in the middle.

A knight with sword and helmet.

This drawing of a castle is directly related to the text. The chapter's title is "Unninn kastali af Metello" (Metellus conquers the castle).

Drawing of two men: the man on the right is urinating.

A drawing of a horse: Equus (Latin).

A later user added a character on the left, who, along with the added words, seems to be conversing with the woman in the middle. The words written are "madur" (man), the name "hakon" and "madur minn" (my man).

The drawing illustrates the text where a witch revives a dead body by whipping it with a worm.

Two characters mentioned in the text are seen here. The woman on the left is dragged ashore on the boat on the right to burn her deceased husband's weapons and clothes.