It must be noted that it has sometimes been necessary to crop the pages to make them fit in the format requirements.

AM 45 fol. is a manuscript from the first quarter of the 14th century that contains Heimskringla (the circle of the world), i.e. the sagas of Norwegian kings (konungasögur) from mythical times until 1177, as well as the saga of Håkon Håkonsson (Hákonar saga Hákonarsonar). The name 'Codex Frisianus' comes from the first known owner of the manuscript: the nobleman Otto Friis.

AM 66 fol. from the 14th century contains the sagas of Norwegian kings (konungasögur). Árni Magnússon writes in a note at the beginning of the manuscript that it was traded and handed down among priests for many generations in Western Iceland, but its actual origin is unknown. Its nickname, 'Hulda', means 'the hidden one, the unknown' in Icelandic.

AM 226 fol. Icelandic miscellany from the middle of the 14th century with biblical texts from the Old Testament and sagas about the history of the Jews and the Romans

AM 226 fol. is an Icelandic miscellany that contains texts with events taken from the Old Testament and classical antiquity. Stjórn, an edited Bible history from the Old Testament in Old Norwegian, occupies most of the manuscript (f. 1r-110r). The rest of the manuscript contains a history of the Romans (Rómverja sögur, f. 110r-129r), Alexanders saga (f. 129r-146v) and a history of the Jews (Gyðinga saga, f. 146v-158r).

AM 242 fol., also known as Codex Wormianus after its earlier owner, the doctor and runologist Ole Worm (1558-1654), is dated to ca. 1350. It contains several didactic texts, including Snorra Edda (a primer on the art of poetry with Nordic mythology as its main topic) and four grammatical treatises on the Icelandic language. 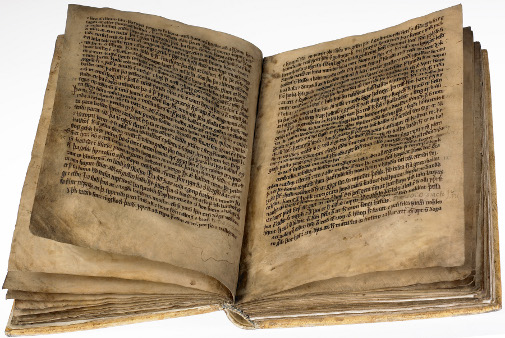 AM 243 b alfa fol., the Norwegian King's Mirror from the middle of the 13th century

AM 243 b alfa fol. is a Norwegian manuscript from around 1275. The manuscript contains The King's Mirror (Konungs skuggsjá), an educational text for princes written as a dialogue between master and pupil. The text was commissioned by Håkon Håkonsson (r. 1217-1263) and had a purpose to raise and educate his two sons, Håkon Håkonsson the Young and Magnus the Law-Mender (Magnús lagbœtir, r. 1263-1280).

AM 4 4to is a law manuscript from around 1300 and is the second oldest preserved copy of the Jutlandic Law. AM 544 4to, also known as 'Hauksbók', is a miscellany that, on top of the various sagas it contains, also contains many informative texts of encyclopedic nature. The first 38 pages consist of various texts on geography (see for example this map of Jerusalem on f. 19v), history, physics and theology. 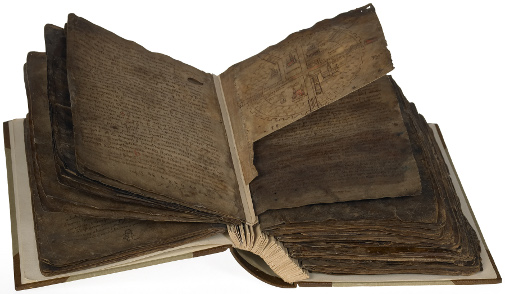 AM 468 4to is a saga manuscript from around 1300. It contains nearly the entire text of Njáls saga, one of the sagas of the Icelanders (íslendingasögur). It got its nickname from its first known owner's place of residence at the beginning of the 1600s: the farm Reykir in Miðfjörður. Despite its modest appearance, it is one of the most important manuscripts preserved from the Middle Ages, partly because it contains Njáls saga, and partly because of its age: its date of writing is close to the first writing down of the saga. 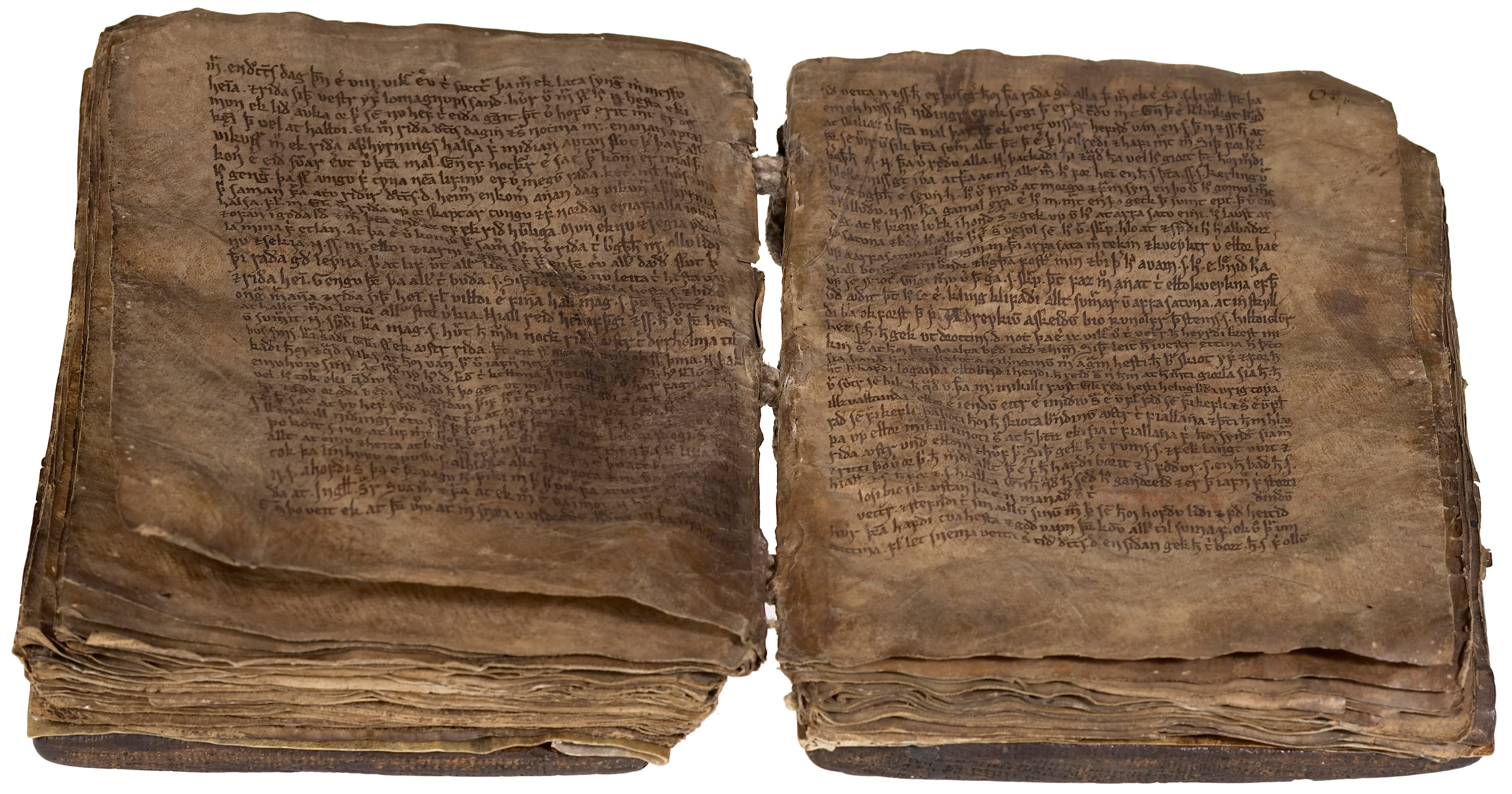 AM 595 a-b 4to, from the period 1325-1350, contains the so-called Rómverja saga, the saga of the Romans. The saga is a compilation of three Icelandic translations of Latin works from the 1st century: the Juguthine War (Bellum Iugurthinum) and the Conspiracy of Cataline (De coniuratione Catilinae) by the Roman historian Sallust, and Pharsalia by the Roman poet Lucan. Only half of the original 76 leaves are preserved. The manuscript was probably written in the monastery at Þingeyrar in the Northwest of Iceland. It is remarkable for its extensive marginalia, some of which is directly related to the content of the text, though other additions bear no relation to the text: drawings (some contemporary to the time of writing), prayers, sayings, verses or single words. 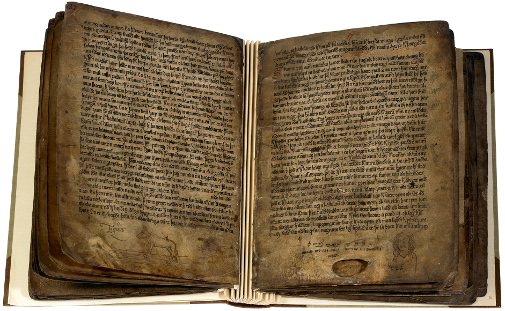 The manuscript is a palimpsest. The original manuscript was written in the 12th century and contained the Psalms of David in two languages: Latin and Old French. The French text in the right columns was erased to make room for an Icelandic translation of the Latin text in the left columns. 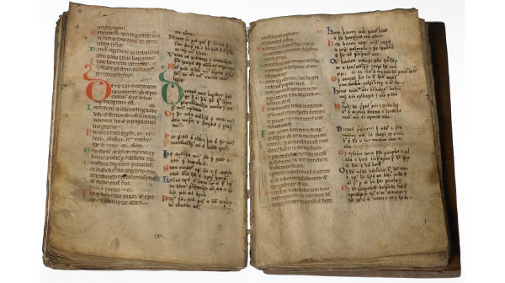 The fragment AM 748 I a 4to from around 1300 contains five mythological poems from the Elder Edda (also called The Poetic Edda). One of these poems is Baldrs draumar (Baldr's Dreams), which is only preserved in this manuscript.

This prayer book from the beginning of the 1500s contains prayers for Sundays, holidays, and saints' days sorted by year. The pages 236r-v contain a prayer for All Saints' Day. 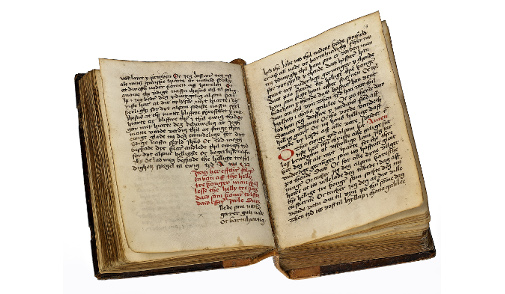 The law manuscript AM 28 8vo, Codex Runicus, from around 1300 is written entirely with runes. The manuscript contains, among other texts, the Scanian Law. 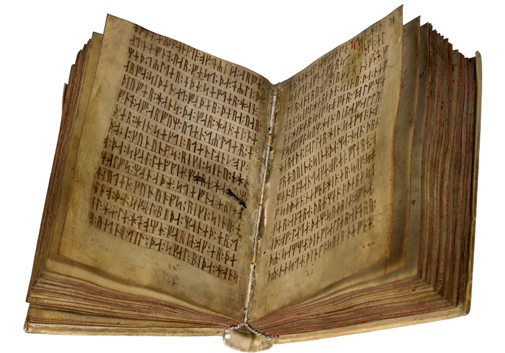 The leech book AM 187 8vo dates from the first half of the 15th century. 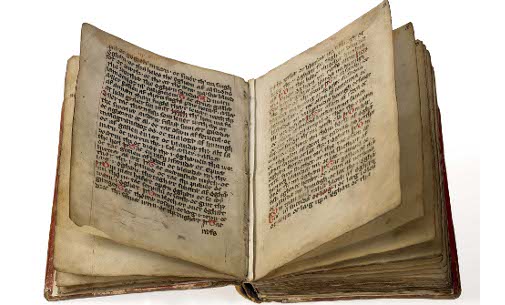 AM 188 8vo. Miscellanies with medicinal advice from the 1500s

AM 188 8vo is a so-called miscellany from the first half of the 16th century. The last pages of the manuscript contain medicinal advice for humans and animals in Danish, Low German, and Latin.

The pages from this prayer book shown here contain an illustrated prayer for Jesus' ascension. The prayer is part of a rosary by the name of the Virgin Mary and the Holy Trinity's Psalter. See a transcription of prayer on f. 30r-31v. 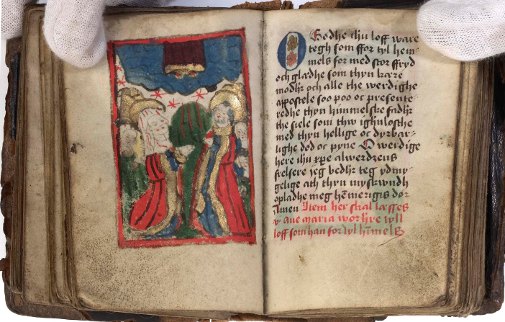 The Royal Library in Copenhagen, Denmark's website contains many digitised manuscripts, the so called e-manuscripts.