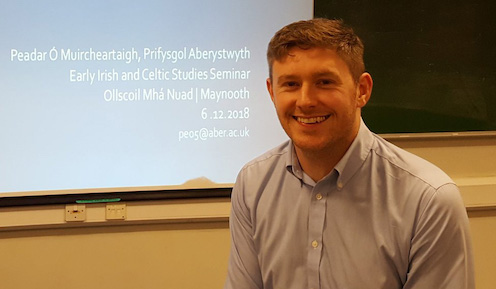 Peadar is lecturer in Celtic studies at the University of Aberystwyth in Wales; previously he was lecturer in Celtic at the University of Glasgow 2011–12 and held an Irish Research Council fellowship at the Dublin Institute for Advanced Studies in 2017–18. He has degrees in Irish and Celtic studies from NUI Galway and the University of Edinburgh. His interests are Gaelic languages of all periods, as well as the long 18th century across the Gaelic world, covering aspects of intellectual culture, manuscripts, textual history and transmission, and the emergence of antiquarianism.

From autumn 2020, Peadar will be based at the Arnamagnæan Institute, NorS, working under the supervision of Prof. Matthew Driscoll on an investigation into the scholarly activity of the Icelandic-Danish scholar Grímur Thorkelin (1752–1829). Supported by the Danish authorities, Thorkelin spent five years travelling through Britain and Ireland in search of material of relevance to the history of Denmark and Scandinavia. His engagement with English and English-language scholarship is well documented – he was to ‘discover’ and later edit the Anglo-Saxon epic Beowulf. Largely unknown, however, is his valuable collection of Gaelic manuscripts and books, now in the Danish Royal Library, and his role as a patron of Gaelic manuscript production and participant in Gaelic book culture during and after his time in Ireland, Scotland and the Isle of Man.

Peadar’s project will use Thorkelin’s literary activity in the British Isles and Ireland as a lens through which to view the differing contexts of the “Gaelic Republic of Letters” in Ireland, Scotland and the Isle of Man. In each country Thorkelin’s research brought him into contact with different groups of scholars, whose political, cultural and social agendas dictated the texts in which they took interest, and the texts communicated to Thorkelin. In his own way, Thorkelin functioned as an important and unique conduit between these groups of scholars and antiquarians at a foundational period in the historiography of Irish and Scottish national and cultural identity.

In recent years the Arnamagnæan Institute has been very successful at attracting Marie Skłodowska Curie fellows from around the world, who have enriched the work at the Institute with their international perspectives, and whose fields of research have added greatly to the study of the manuscript collection. We are therefore excited to be working with Peadar and look forward to following his results.