The Law of Gotland in Danish Hands

The Arnamagnæan Collection contains a manuscript written in the medieval language of Gotland in the Baltic Sea. The manuscript is best known for being the younger of the two main manuscripts containing the law code of the Gotlanders, commonly known as Guta lag. But while the manuscript is younger, the text may well be older, and the language of the text shows signs of another version of the law text.

AM 54 4to is the only manuscript in the Arnamagnæan Collection written in Old Gutnish, the medieval language of the Baltic island of Gotland. It is one of two manuscripts containing the Guta lag, Law of the Gotlanders. The other manuscript, Stockholm, Royal Library, B 64, dates from the fourteenth century, and is commonly used as the main source of knowledge for the Old Gutnish language; so common, in fact, that it has been nicknamed ‘Codex A’. AM 54 4to, being more than two hundred years younger, and containing a number of linguistic peculiarities, is best known by its (rather unfortunate) nickname ‘Codex B’.

Considering the island of Gotland is today a province of Sweden, it may seem surprising that one of the two main surviving law manuscripts is housed in Denmark. Árni Magnússon writes on a slip at the beginning of AM 54 4to that it belonged to Jens Rosenkrantz, who possessed a number of other mansucripts which would later come into the Arnamagnæan Collection, most of which were written outside of the Kingdom of Denmark. Guta lag’s ‘Codex B’, however, was in Danish hands the entire time.

A Danish Scribe in a Gutnish Manuscript?

The colophon at the end of the manuscript dates AM 54 4to to June of 1587, and identifies the scribe as ‘David Bilefeld, Priest at Barlingbo and Provost of the Northern Riding’. Though a priest on Gotland (who would later become the Superintendant of the Diocese at Visby), Bilefeld hailed from the Jutland peninsula in Denmark. At the time, Gotland belonged to the Kingdom of Denmark, and the priests and other learned élite of the island were Danes.

Even under Danish rule, Guta lag remained the valid law code on the island of Gotland. It is clear in AM 54 4to that David Bilefeld intended to use his paper codex to familiarize himself with the local law. The entire manuscript is written in dark ink, with red used for chapter headings (rubrics) and some of the enlarged initials; otherwise there is no decoration. 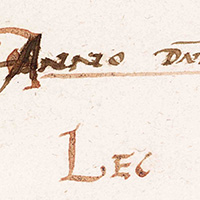 The main text is complete, and a table of contents is found at the end of the manuscript, also copied by Bilefeld. However, he never finished the title page, which only contains the date (Anno Domini 1587) and the letters ‘LEC’, which was probably meant to read Leges Gothilandorum ‘Laws of the Gotlanders’.

That is not to say Bilefeld never used his manuscript. Throughout the main text Bilefeld has added marginal notes from other law manuscripts, including ‘Codex A’ to which he clearly had access (some marginal notes in ‘Codex A’ are in Bilefeld’s hand, as well). In other places Bilefeld compares the Gotlandic law with a law more familiar to him, the Old Danish Jyske lov from his native Jutland.

Bilefeld also states in the colophon that he copied AM 54 4to from an exemplar manuscript written in 1470. This codex has since been lost, but some of its features can be reconstructed when one compares Bilefeld’s manuscript with the ‘Codex A’ manuscript of Guta lag.

For example, the 1470 codex likely spelled the þ-sound with th instead of þ, which Bilefeld then copied in the main text and occasionally confused with t. In some of the marginalia, including some taken from ‘Codex A’, Bilefeld uses þ. Another feature Bilefeld must have copied from his exemplar manuscript is the spelling ei or ey for the characteristic Gutnish diphthong ai, still found in the Gotlandic dialect today in words like stain ‘stone’. These and other features of the spelling indicate Danish influence on the Gutnish text. Considering the date of the exemplar manuscript, when Gotland was already under Danish rule, we can reasonably assume the scribe of the 1470 codex was also a Dane.

A Younger Manuscript, an Older Law?

Some of the other linguistic features of AM 54 4to reflect changes in the Old Gutnish language not yet visible in the older manuscript ‘Codex A’. For example, the verbs aiga ‘have’ and giera ‘do’ inflect more regularly in the present tense as aigur ‘has’ and gierir ‘does’, as opposed to the irregular inflection ā ‘has’ and gier ‘does’ still used in ‘Codex A’. The younger manuscript also once uses the verb betala ‘pay’, a loanword from Low German, where the older manuscript uses the native Gutnish verb gielda ‘pay’.

That does not mean that everything in AM 54 4to is younger, however. In fact, the manuscript contains some older statutes which are not found in ‘Codex A’, and point to the younger manuscript preserving an older recension of the law. These include many laws concerning the rights of slaves, even though slavery had already been abolished in Scandinavia. 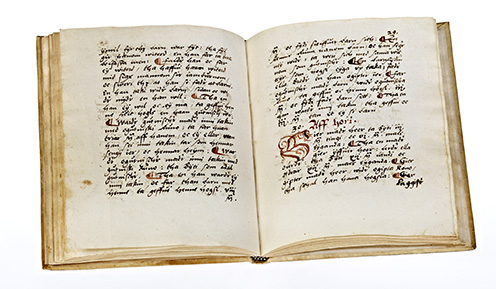 Seán Vrieland is a post-doc at the Arnamagnæan Institute. In December 2017 he defended his ph.d. thesis on the Guta lag and AM 54 4to.