A diploma from the beginning of the fifteenth century is written in an early form of Faroese and tells of the island nation's richest woman. 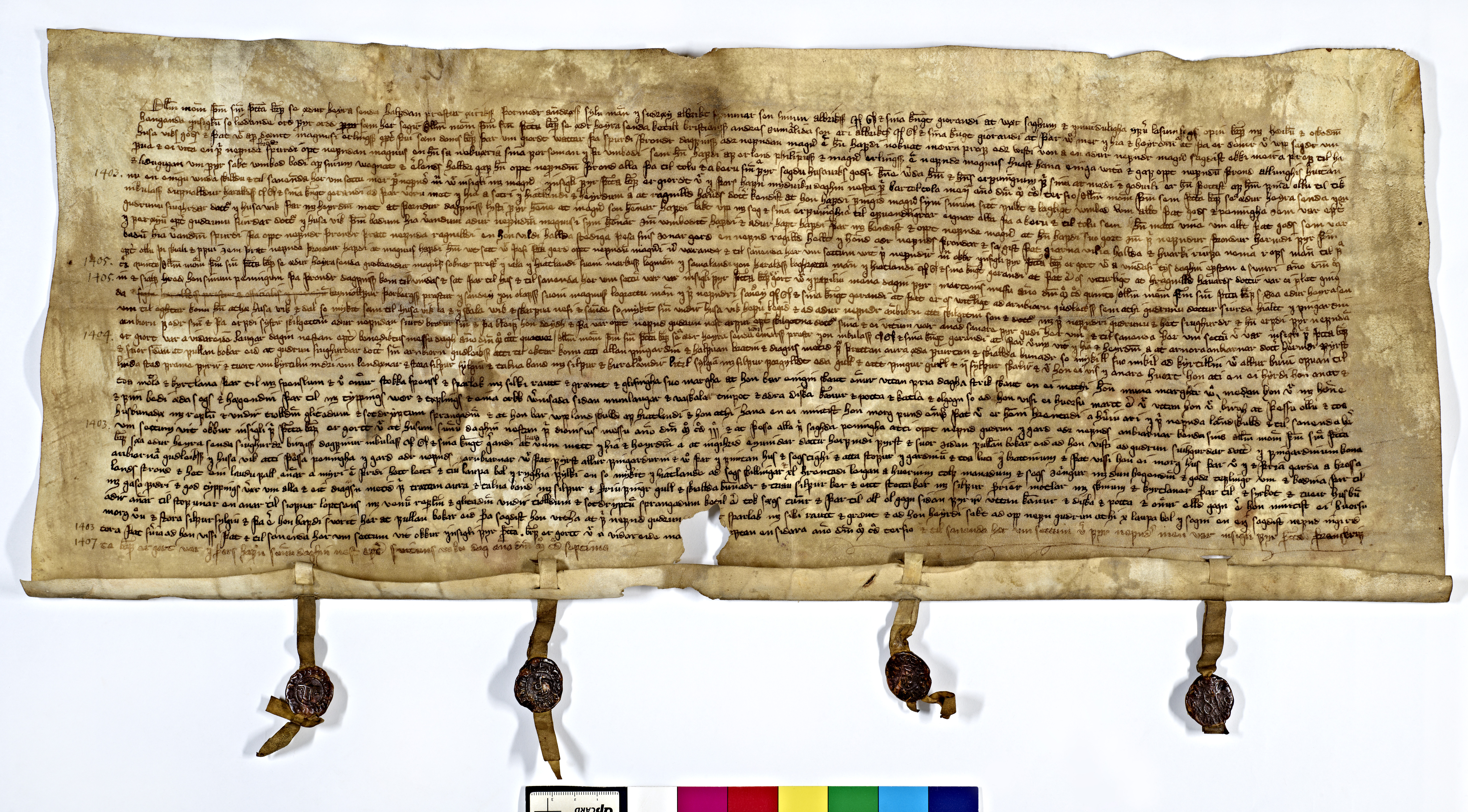 This impressively large document (63cm/25" wide) contains a transcription of six letters, all written between 1403 and 1405, embedded in a diploma written in 1407 in Tórshavn, the capital of the Faroe Islands. These so-called Húsavík Letters (Húsavíkarbrøvini) all concern the estate of one of the wealthiest women in the Faroe Islands, Guðrun Sjúrðardóttir (or Sigurðardóttir) in Húsavík on the island of Sandoy, who died in 1405 with no immediate heir to her property in the Faroes, Norway, and Shetland. Today these letters are held in the collection of diplomas from the Norwegian realm (including the Faroes, Shetland, and Orkney) under the shelfmark AM Dipl. Norv. fasc. C, 1a.

The entire document is written in a single hand using a typical early-fifteenth-century document hand. The letters are all written as a single flowing text, despite being seven distinct letters. As with many medieval diplomas, the Húsavík Letters all begin with the same formulaic opening, Ǫllum mǫnnum þeim sem þetta bref séa eðr heyra 'To all men who see or hear this letter', making it possible to find the start of a new letter. For the ease of studying the letters, a later hand has added a small line at the beginning of each new letter and written the date in the left margin.

Hanging from the bottom of the letter are four seals from the four men who wrote the framing text: Halfdan prestr Eiriksson, Þormóðr Andreson sýslumaðr í Suðrey (Suðuroy), Albrikt Símunarson, and Símun Albriktsson. It was previously thought that there were originally six seals, evidenced by holes at the bottom of the document in the middle and on the left side. However, this damage probably occurred when the document was folded; corresponding damage can be seen at the top of the document in the middle, where no seal would have been found. 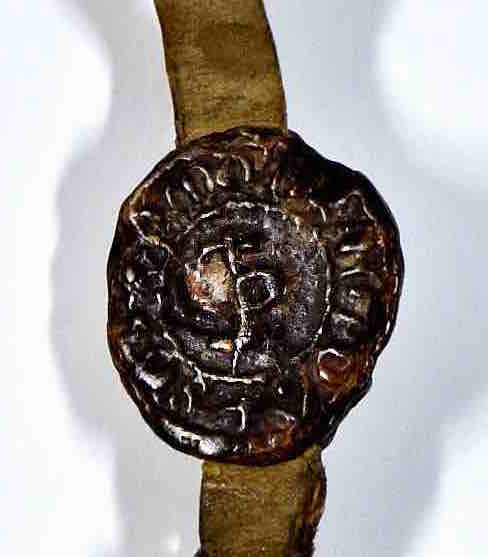 Þormóðr Andresson's seal. In the middle you can see the letter 'þ'. (Click on the picture for a larger image.)

The Lady of Húsavík

According to Faroese legend, the Lady of Húsavík (Frúgvin í Húsavík) was the richest woman in the Faroe Islands. One legend tells of a woman named Sissal or Cecilia, who found a golden horn buried in the ground and, after having sold it to the king, bought all the land from Húsavík to Skarvanes.[1] Although the names differ, this legend probably refers to Guðrun Sjúrðardóttir who, according to one of the Húsavík Letters, owned property in Húsavík, Skarvanes, Skálavík, and Sandur, amounting to half of the island of Sandoy.

We know from the letters that Guðrun belonged to a Shetlandic family. Her father Sjúrðr (or Sigurðr) is given the nickname Hjaltr, meaning "Shetlander", but is said to have lived in Finnegård (Finngarðr) on the Hanseatic dock in Bergen, Norway. Guðrun's property, likely inherited from her father, included Finnegård and another property on the Hanseatic dock, Bratten (Brattrinn), as well as other properties in Norway and Shetland.

We also know she was married to the Faroeman Arnbjørn Guðleiksson in Húsavík on the island of Sandoy and that they had two children: a son, Sjúrðr, and a daughter, Arnóra. When Arnbjørn died in 1403, the inheritance went to the son, Sjúrðr. According to the national law at the time (Magnus the Lawmender's National Law), if a man had one son and one daughter, the son would inherit two-thirds of the property, and the daughter one-third.

Guðrun died in 1405, leaving no family members in the Faroe Islands to inherit her property and great wealth. One of the Húsavík letters, written that same year in Windhouse, Shetland, tells of the Shetlander Ragnhildr Hávarðsdóttir, who claimed the inheritence for her son, Magnus Erlingsson.

Today the Faroe Islanders speak a language closely related to Icelandic, though different in many ways. Unlike in Iceland, where a vibrant manuscript culture meant the changes happening in the language through the centuries were well recorded, there is very little written evidence for Faroese before the nineteenth century, when the clergyman V.U. Hammershaimb proposed a written standard for the language.

The Húsavík Letters are therefore an important source of information for the history of the Faroese language. Although the letters are clearly written in a form of Old Norse, there are some traits that point to early developments specific to Faroese. For example, Old Norse fengit 'received' and gengin 'gone' are spelled fingid and gingin, as in Faroese fingið and gingin. Some of the evidence must be taken with a grain of salt, however. In one of the letters, we find the phrase ok þa bleif hon deydh 'and then she became dead', which appears to be early evidence for Faroese deyður 'dead' from Old Norse dauðr. The development of Old Norse au into Faroese ey is not otherwise found in the letters; all other examples are spelled with au, as in laugar dagin 'Saturday' (Faroese leygardagin). Instead, deydh may have been confused with the verb deyði 'died' (Faroese doyði).

Nevertheless, the Húsavík Letters remain an important source for the history of the Faroe Islands and the Faroese language. 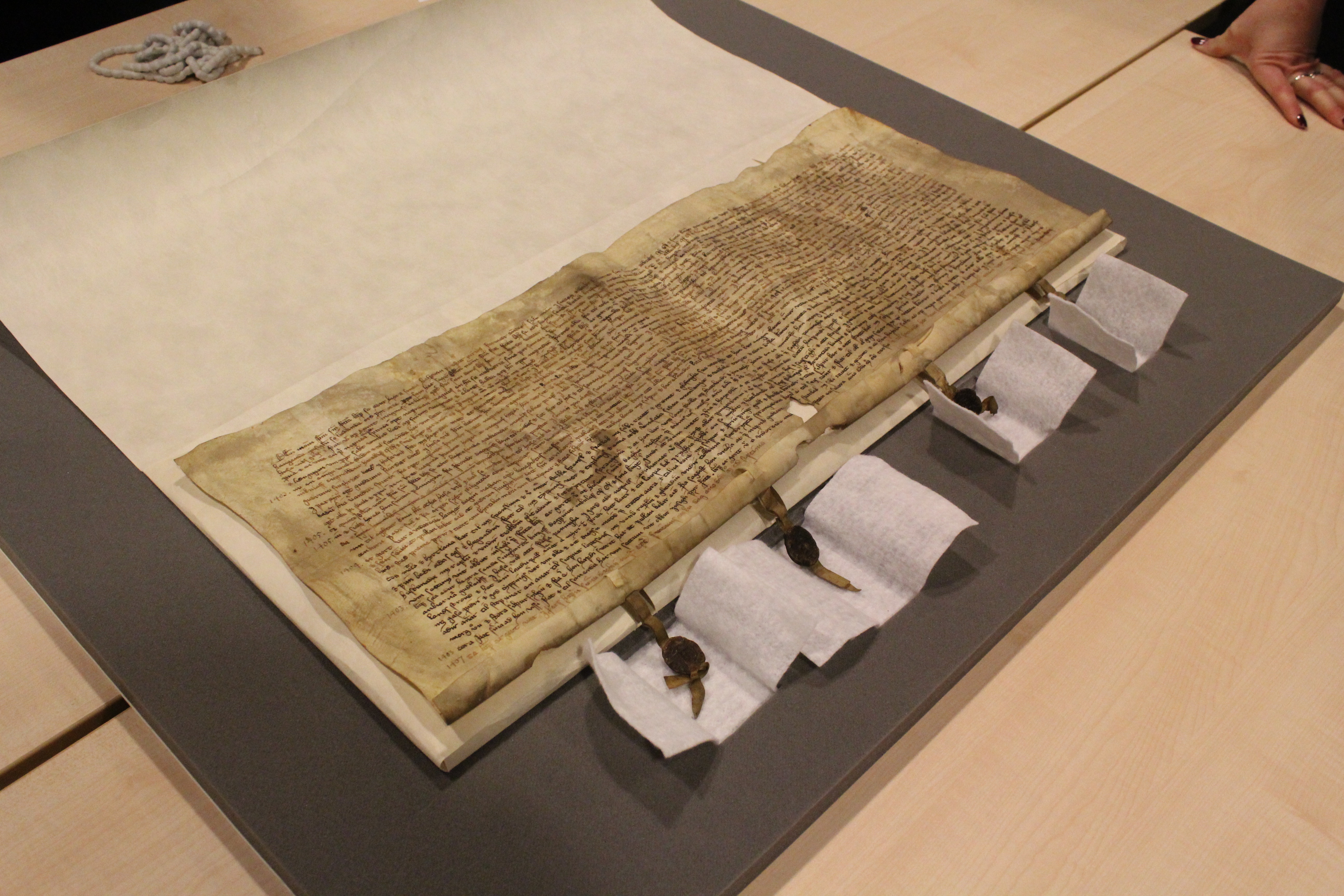 Seán Vrieland is a post-doc at the Arnamagnæan Institute.