A fragment of the younger redaction of the lost Skjöldunga saga 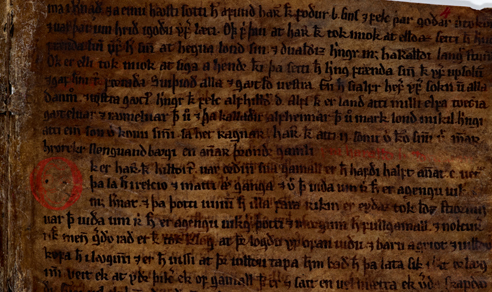 This small, dark and at first glance unprepossessing manuscript contains a fragment of the younger redaction of The saga of the Skjöldungs (Skjöldunga saga), the history of the most ancient Danish royal family, from Odin’s son, King Skjöld – Beowulf’s Scyld Scefing – to Gorm the Old. The fragment, which is known as Sögubrot af fornkonungum (Fragment of a saga about ancient kings), is an important source for the history of Icelandic literature in the Middle Ages.

One of the oldest sagas

Skjöldunga saga is one of a number of sagas which have unfortunately been completely lost. The older version of the saga is believed to have been written at the end of the twelfth century, possibly by Páll Jónsson (1155–1211), bishop of Skálholt, who was consecrated by Archbishop Absalon in Lund in 1195. The younger redaction is believed to have been written around 1250 by Snorri Sturluson’s nephew, Óláfr Þórðarson hvítaskáld (the white-poet; c. 1210–1259), who was in Denmark in 1240–1241 with King Valdemar the Victorious.

Skjöldunga saga was lost in the seventeenth century, but before it went missing it had been used as a source by historians and learned men from the thirteenth century until ca. 1600. Their works incorporate sections of Skjöldunga saga by means of which one can form a fairly good impression of the original saga and its content. The Icelandic historian and politician Snorri Sturluson made use of Skjöldunga saga in his Edda and Heimskringla, for example, but our chief source for the saga is a Latin rendering by the Icelandic historian Arngrímur Jónsson (1568–1648) in his Fragments of Danish history (Rerum Danicarum fragmenta) from 1596.

The main characters in the saga are the legendary Danish kings Ivar Vidfamne (wide-grasping) and Sigurd Ring. The fragment begins with a discussion between Ivar and his daughter concerning her wedding, and ends with Sigurd Ring’s old age. After a lacuna in the fragment, the great battle between Harald Wartooth and Sigurd Ring, the Battle of Bråvalla, is recounted. The 150-year-old Harald has challenged his vassal, Sigurd Ring, to fight in order to avoid an ignominious death at the hands of old age. Heroes from throughout the northern lands, berserks and shieldmaidens take part in the battle. Harald Wartooth is killed by one of his own men and is buried afterwards in grand style. While the original Skjöldunga saga appears to have been concise and objective, the younger redaction reflects a different and marked tendency to entertain: there are lengthy battle scenes, detailed descriptions of poetic dreams and dialogues which sometimes remind one of eddic poetry. On the basis of these differences the older redaction has often been categorised by scholars as a Kings’ saga and the younger as a fornaldarsaga (Legendary saga).

AM 1 e β I fol. dates from around 1300. The manuscript is severely damaged and consists today of a single quire of six leaves, the two innermost leaves of the quire having been lost. The manuscript has also been trimmed and now measures 19 × 15 cm. In the nineteenth century it was discovered that this fragment and AM 20 b I fol. had originally been part of the same codex. AM 20 b I fol. contains a fragment of Knýtlinga saga, which covers the history of the kings of Denmark in historic times. AM 20 b I fol. is, in contrast to AM 1 e β I fol., fairly light in colour and has broad margins – measuring 24.5 × 17.7 cm. Both fragments are written in a neat and regular hand. The headings are in red, and in many of the initials a face has been drawn. The original codex must therefore have been large and impressive – a history of the Danish kings on a grand scale, from earliest times up until the near present, similar in scope and style to Snorri’s history of the Norwegian kings, Heimskringla.