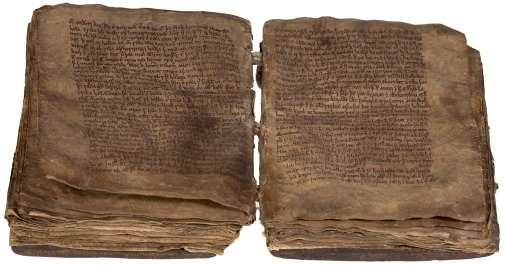 The manuscript AM 468 4to, better known as Reykjabók (the book of Reykir), was written in Iceland around or shortly after the year 1300 by a single unknown scribe. Although perhaps not the most visually impressive of Icelandic manuscripts, Reykjabók is nevertheless one of the most important, as it contains an almost complete text of the famous Njáls saga, written relatively shortly after the saga’s presumed date of composition.

Reykjabók consists, in its present state, of 94 vellum leaves; just two leaves are missing from the original codex. The first of these was replaced sometime in the seventeenth century by a new leaf containing text corresponding to the missing part, but of poor quality. The second leaf went missing after the manuscript came into the possession of Árni Magnússon in the first half of the eighteenth century. The content of this missing leaf was not lost, however, thanks to a very meticulous copy of the manuscript Árni had had his brother Jón make before the leaf went missing. Jón Magnússon transcribed many medieval manuscripts and took great care in reproducing palaeographic details in his transcriptions, as can be observed when comparing his copies to existing originals. We can therefore assume that all the orthographic characteristics of the missing leaf have been preserved in his transcription.

A notable feature of the text of Njáls saga preserved in Reykjabók is the presence of many verses which are not preserved in other versions. These verses are mostly found in the margins, which suggests they were inserted after the main text was written. Moreover, they were not written by the scribe of the main text, but appear to have been added by a contemporary hand. This odd feature of the manuscript gives us some insight into the working methods of medieval scribes and how different sources must have been brought together in creating Reykjabók.

We do not know much about the history of the manuscript during the first 300 years of its existence, but statements found on the first, originally blank, leaf reveal a fascinating trail of later ownership. The name Reykjabók refers to the farm Reykir in Miðfjörður, northern Iceland, where the first known owner of the book, Ingjaldur Illugason, a member of the law court (lögrétta), is known to have resided in the first half of the seventeenth century. In 1642 he gave the book to his son Jón, who in turn passed it on to his cousin Þorkell Arngrímsson, the son of the famous scholar Arngrímur lærði (the learned). Þorkell took Reykjabók with him to Denmark where he was studying. The codex then made its way to Holland with Þorkell, who in 1652 presented it to the Dutch orientalist Jacob Golius (1596–1657), professor at Leiden University. There it remained until 1696 when it was purchased at auction by the Danish book collector Niels Foss (1670–1751) and returned to Denmark. Reykjabók’s peregrinations did not end there, however, as Árni Magnússon procured the book from Foss in 1707 and had it shipped back to Iceland, where his brother made his aforementioned copy. In 1722 the manuscript crossed the north Atlantic for the third time, back to Árni in Copenhagen, where it has remained, for the most part, until the present day.

Reykjabók thus provides not only a glimpse into how Old Icelandic literature was created but also demonstrates how books were passed between people and could travel far and wide. The fact that Reykjabók has survived to this day, in remarkably good shape despite its many journeys, makes this interesting manuscript even more intriguing.