Rasmus Rask's foundational text on the origin of Icelandic was originally written as a prize essay. The Arnamagnæan Collection holds a copy of the first printed edition, which turns 200 years old this year, with notes written in the author's own hand. 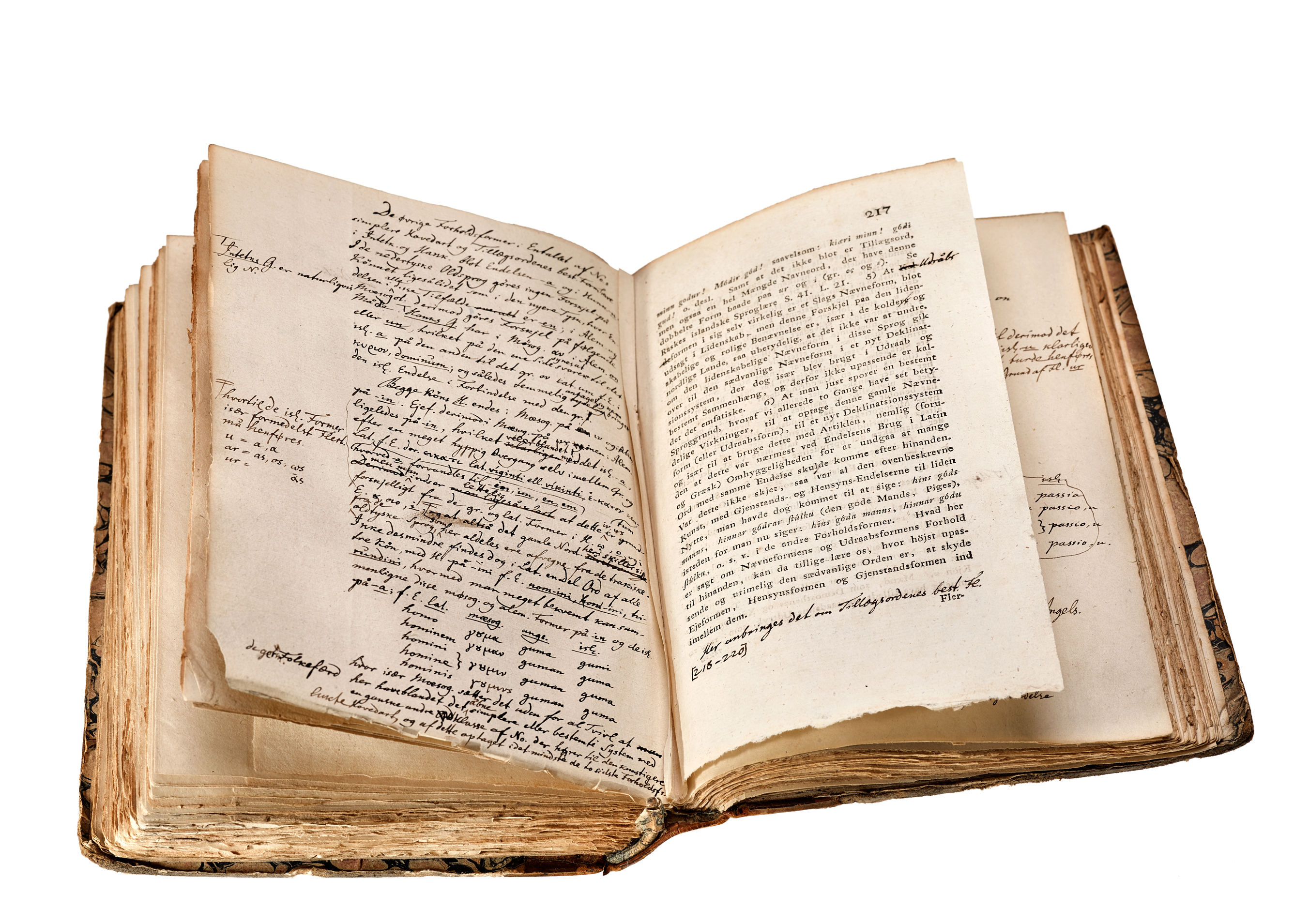 In addition to manuscripts in the most basic understanding — that is, fully hand-written codices — the Arnamagnæan Collection contains a number of early printed treasures, as well as items that lie somewhere between manuscript and printed book.

This month’s featured manuscript is essentially a printed book, but one which contains the handwritten notes of one of Nordic Philology’s great names, Rasmus Christian Rask (1787-1832). This year marks the 200th anniversary of the publication of Rask’s magnum opus on Icelandic, Investigation of the Origin of the Old Norse or Icelandic Language, a work which can be said to have jump-started linguistic research in the Nordic languages.

Already from an early age Rasmus Rask, who was born near Odense on Funen in 1787, was interested in the Nordic languages. In his late teenage he began to teach himself (Old) Icelandic from Gerhard Schøning’s 1777 folio edition of Heimskringla, and after moving to Copenhagen in 1807, he quickly became recognized by his teachers and mentors for his unique linguistic talent, especially the professor Rasmus Nyerup (1759-1829), who employed the young Rask’s talents on his translation of Snorri Sturluson’s Edda published in 1808.

Nyerup helped the young student find a place in Regensen, a dormitory in the of Copenhagen (where Árni Magnússon also lived for a time), and a position as a volunteer at the University Library. By 1809 Rask completed his first book, Introduction to the Icelandic or Old Norse Language, which would be published two years later. Two years after that, in 1813, Rask set out on a two-year journey to Iceland, where he continued to learn the language that so enraptured him during his youth.

After returning from Iceland, Rask was instrumental in the founding of the Icelandic Literary Society (Hið Íslenzka Bókmenntafélag) in 1816 and the Royal Nordic Society of Antiquaries (Det Kongelige Nordiske Oldskriftselskab) in 1825. The latter was formed after Rask had been on another journey abroad, which would bring him to Russia, Persia, and India, where he studied numerous Asian languages and collected manuscripts, which are now part of the Oriental Collection at the Royal Danish Library. Only a year before his death, Rasmus Rask became professor of Eastern Languages at the University of Copenhagen. 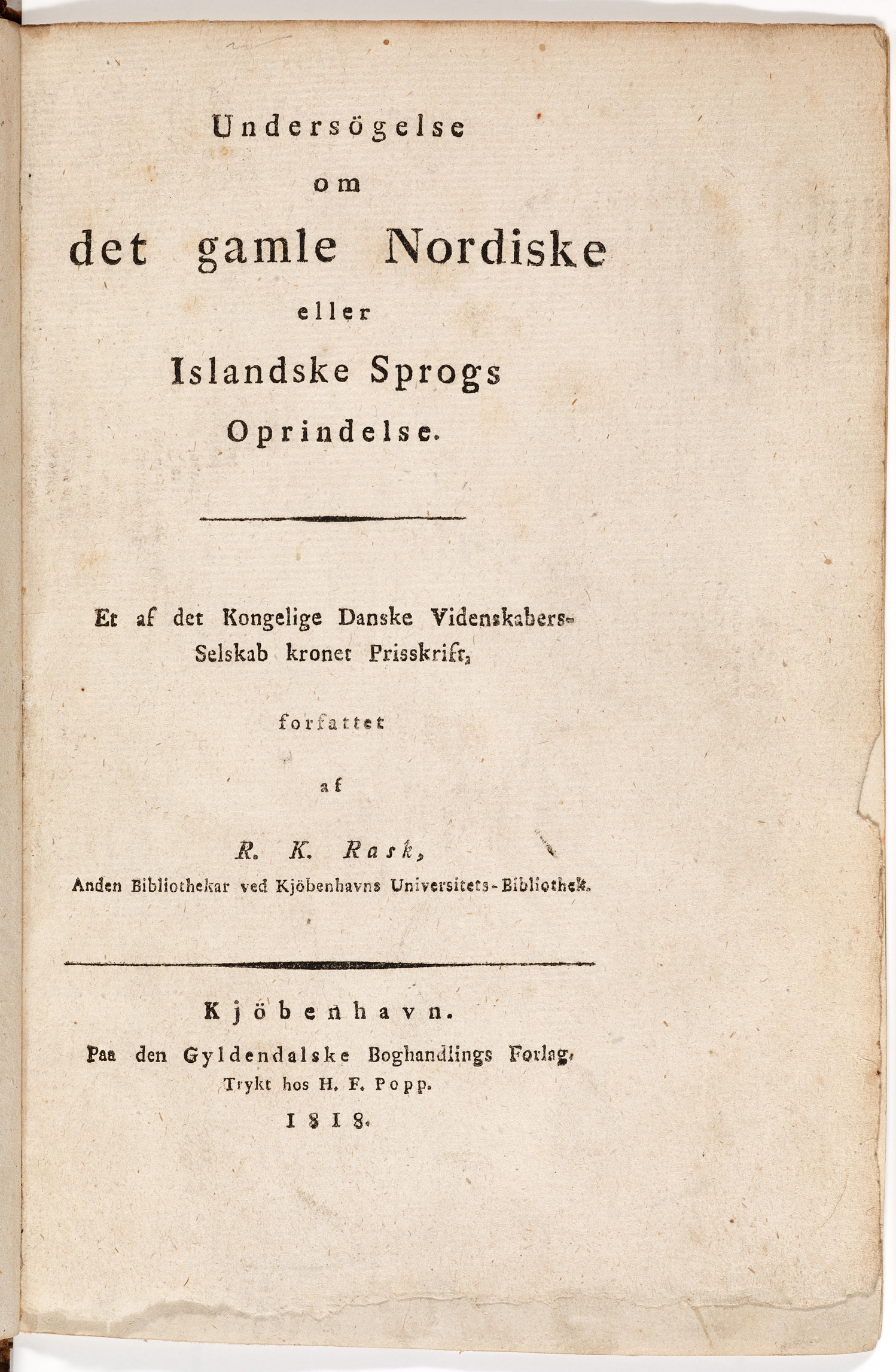 Rask’s Investigation of the Old Norse or Icelandic Language is one of the foundational texts for the discipline of comparative linguistics, but it began as a prize essay in response to a call given by the Royal Danish Academy of Sciences and Letters (Kongelige Danske Videnskabernes Selskab). The objective, according to what Rask writes in the introduction to the published volume, was

“Investigating with historical criticism and illustrating with appropriate examples, from which source the old Scandinavian language may most safely be derived; stating the character of the language and its relations from ancient times and throughout the Middle Ages both to the Nordic and to the Germanic dialects; and ascertaining the exact principles upon which all derivation and comparison in these idioms should be based.”

The essay was delivered to the Academy on the 2nd of December 1814, when Rask was already in Iceland on his journey.

The importance of Rask’s Investigation can hardly be understated. The careful comparison of Icelandic to Latin and Greek resulted in a description of the Germanic Sound Shift, also known as Grimm’s Law after the German philologist Jacob Grimm (of the Brothers Grimm), who described the phenomenon in his 1822 Deutsche Grammatik.

Rask presents his description of the sound correspondences between Greek and Latin on the one side and Germanic on the other nearly as if the latter derived from the former, rather than both from a common ancestor (which we today call Proto-Indo-European). He writes for example, that “π becomes f” as in Greek πατήρ, Icelandic faðir ‘father’. Rask goes on to note that “often they are also changed in other ways”, especially in the middle of words, for that t corresponds with d [ð] in pater:faðir ‘father’. The explanation for this exception would not appear for another half a until it was discovered by yet another Dane, Karl Verner(1846-1896), and therefore is known as Verner’s Law.

Rask 116 - A first printing with the Author’s own notes

This brings us to the featured manuscript of the month, which today bears the shelfmark Rask 116. As the beginning of the shelfmark indicates, Rask 116 is part of the Rask collection, a collection of 119 manuscripts and printed books which had belonged to Rask, many of which he collected during his time in Iceland. Following Rask’s death in 1832, the collection was sold to the Arnamagnæan Commission by his younger brother, Rev. Hans Kristian Rask, for the sum of 150 Rigsbankdaler (about the price of 5 cows).

The printed book is with originally blank leaves intended for notes — in this case, notes made by the author himself. While most of these inserted leaves are still blank, some contain copious notes by Rasmus Rask, such as the verso of the leaf inserted between pages 216-217 and the recto of the leaf inserted between pages 218-219, which contain full paragraphs and extra paradigms.

Throughout these pages of we get a small glimpse into the linguistic genius that was Rasmus Rask. We find glosses in dozens of languages ranging from Arabic to Welsh, as well as inserted references to other scholarly publications.

Yet it is also clear from the notes that Rask was preparing for edition of his Investigation, which would never be published during his lifetime. Throughout the printed text, corrections are made. On page 91, for example, we find an entire sentence has been deleted at the end of the introduction to the chapter wherein Rasks compares Icelandic to various language families (“Det da at med de nærmeste” It seems natural to begin with the closest). In the following section, introducing Greenlandic, we find Rask has crossed out the word Flertal ‘plural’ and written Talböjning ‘number declension’ in the since Greenlandic nouns not only have a plural form, but also a dual. These corrections, however, never made it into Louis Hjelmslev's 1932 republication of Rask’s Investigation.

Seán Vrieland is a post-doc at the Arnamagnæan Institute.

Gregersen, Frans (ed.). 2013. Investigation of the Origin of the Old Norse or Icelandic Language: New edition of the 1993 English translation by Niels Ege. Amsterdam: John Benjamins.