A small 22-page manuscript, half Danish, half Faroese, tells the story of a common interest in Faroese literature.

The Faroese ballads (kvæði) are an important part of the literary and linguistic history of the Faroe Islands and are found in a number of manuscripts from especially the 19th century. While most of the – especially well-known – manuscripts were copied by Faroe Islanders or on the Faroes, there are also some records copied by Danes.

A manuscript in the collection belonging to the Danish linguist Rasmus Rask (1787-1832), Rask 113, is actually both: that is, both written by a Faroe Islander in the Faroes and by a Dane in Denmark. The names of both of these copyists are also well known. Even though the manuscript only contains 22 pages, the story of its production tells a great deal about nineteenth-century interest for the Faroese ballads, both on the islands and in Denmark.

Rask’s half of the manuscript begins with a list of the Faroese ballads found in the Jens Christian Svabo’s large ballad manuscript, which today is housed in the Royal Library in Copenhagen, GKS 2894 a-c.

Following the list, there are three copies of ballads from Svabo’s manuscript:

Concerning the dating of this part of the manuscript, Povl Skårup (Rasmus Rask Færøsk, Copenhagen 1964) believes Rask to have copied the ballads somewhere between spring 1808 and April 1810, since the metatext (rubrics, etc.), which are in Danish, are written using Gothic-style lettering, while everything in Faroese is written with Roman lettering.

The second half of the manuscript consists of only one ballad, namely Finnboga ríma (CCF 47 C) is dated precisely to May 22, 1823. The ballad tells of the Faroe Islander Finnbogi, who kills a man named Álv. The Norwegian regent Hákon Jarl sends a message to Finnbogi, telling him to fight both a knight and a polar bear, which he then does successfully.

The scribe of this part of the manuscript was the Faroe Islander Jacob Nolsøe (1775-1869), commerce manager for the Danish monopoly on the Faroe Islands and brother of the aforementioned Poul Nolsøe (Nólsoyar-Páll).

Jacob Nolsøe is otherwise best known for his translation of Carl Ploug’s poem about the 1848 Battle of Schleswig (Påskeklokken , 1848), the ballad Orrusta við Heiðabý (‘The Battle of Schleswig’; CCF 234). The Arnamagnæan Institute houses manuscripts in Nolsøe’s hand: a Faroese grammar (AM 973 4to).

It is certainly no coincidence that the two parts of the manuscript were bound together. The two language fanatics corresponded during the years 1831-1832 regarding an orthography for Faroese, which still at that point had no official spelling (it didn't come till later in the nineteenth century, driven by the provost V.U. Hammershaimb, who published a Faroese grammar in 1854).

Between 1829 and Rask’s death in 1832, the Danish linguist received multiple manuscripts from Nolsøe, including a grammar, Færøsk Sproglære, which is now also housed in the Arnamagnæan Institute (AM 973 4to). Nolsøe’s copy of Finnboga Ríma now in Rask 113 was, however, the first manuscript Rask received from the Faroe Islander, though exactly when is unclear.

Rask had yet another connection to the Faroese businessman and politician. During the years 1830-1832, Nolsøe’s daughter, Maren Margrete, widow of a skipper named Kjergaard who was lost at sea, worked as a housekeeper in Rask’s house, where she received two  per month. During her employment, she donated yet another of her father’s manuscripts to the University , Add. 300 4to. Rask, who was at the time employed at the library, wrote a note about the donation at the back of the manuscript.

Despite the numerous manuscripts sent between Rask and Nolsøe through the years, only Rask 113 can be called a “two-in-one”: One manuscript by Rask, the other by Nolsøe. 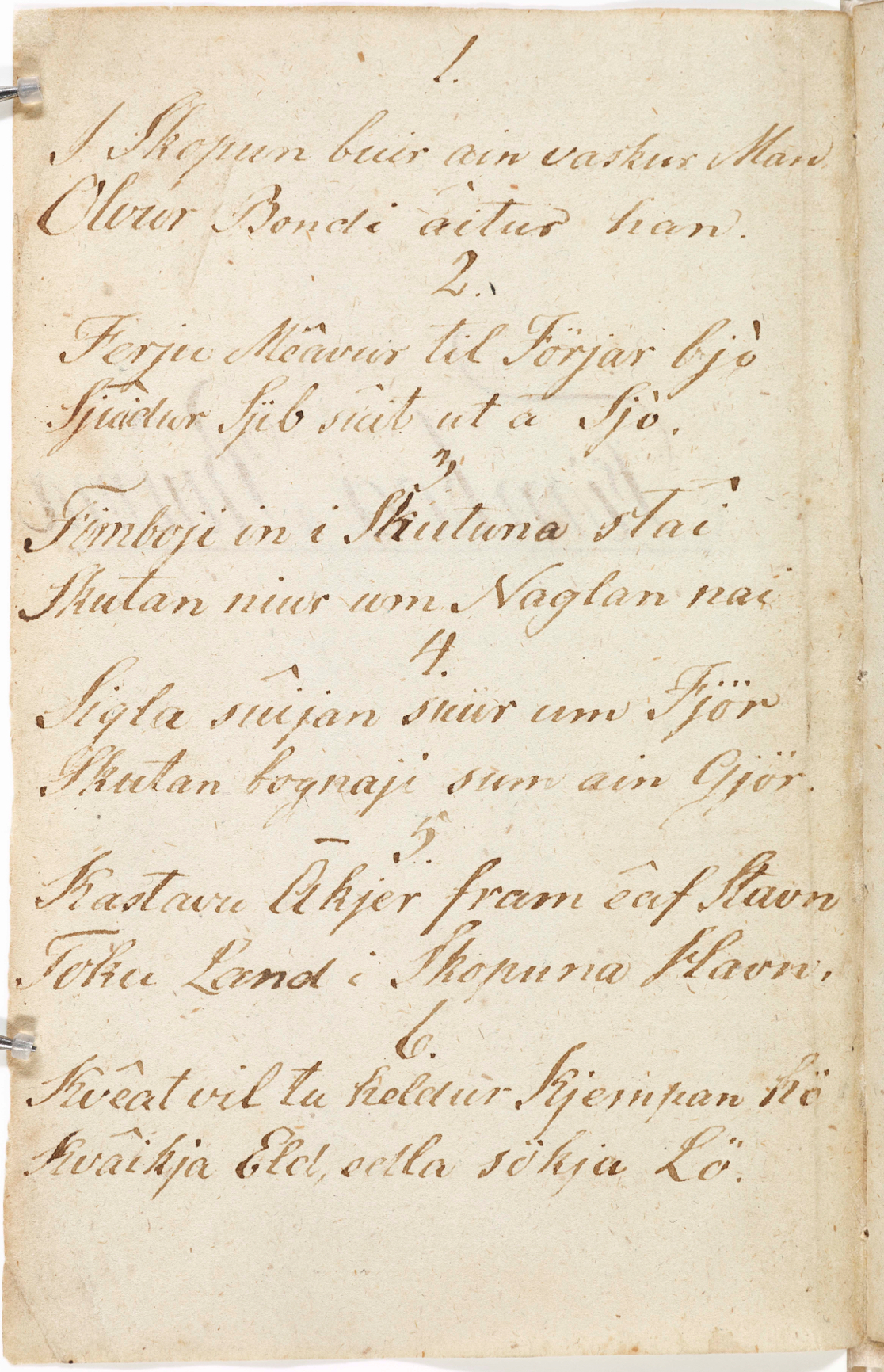 Seán is a post-doc at the Arnamagnæan Institute.

Kwakkel, Erik. 2002. Towards a terminology for the analysis of composite manuscripts. Gazette du livre médiéval 41, s. 12-19.