Patronage and Memory in a Medieval Charter

A charter from 1259 issued by Archbishop Jakob Erlandsen charter situates him within a vast web of patronage, extending upward to the saints and downward to the nuns and poor people of Roskilde. 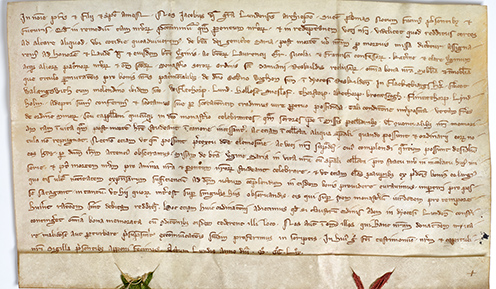 Archbishop Jakob Erlandsen grants property to St Clara Convent in Roskilde. (Click on the image for a larger version.)

Dipl.Dan.Fasc.LI no. 30 is a charter issued at Lund by Archbishop Jakob Erlandsen in 1259. The charter grants property to the Poor Clares in Roskilde. It was intended to endow regular masses and provides detailed instructions for the performance of these religious services. The charter was witnessed by the Lund cathedral chapter. It originally bore the seals of the chapter and archbishop. The charter is written in a form of Gothic cursive typically used for such documents.

The charter originally bore the seal of the archbishop. Here you can see one of two silk ribbons on which there are traces of a red wax seal.

Jakob Erlandsen’s charter situates him within a vast web of patronage, extending upward to the saints and downward to the nuns and poor people of Roskilde. Its provisions were intended to be mutually beneficial. In exchange for his donation, the archbishop wanted a priest to say mass in the nunnery every day. During the archbishop’s lifetime, it should be a mass ‘of the blessed Mary, mother of God’ (de beata dei genetrice Maria). He could hope that this would win the Virgin’s favor, and that she would therefore protect him while he lived. The additional masses were spiritually beneficial to the nuns of Roskilde.

A mass for the dead

The daily masses were to continue in a different form after the archbishop’s death. After that time a mass for the dead was to be substituted for the Virgin Mary mass. It was meant ‘for the benefit of our soul and the souls of our parents’ (pro anima nostra et parentum nostrorum). The archbishop foresaw that he, like most people, was destined to spend a period of time in purgatory. Masses for the dead were considered one of the most effective ways to benefit souls in purgatory.

A helping hand in purgatory

His final request was that a portion of his donation should fund alms to the poor. These alms were an act of charity that demonstrated the archbishop’s patronage and power. The poor who received the alms could be expected to pray for the archbishop.

Archbishop Erlandsen’s strategy was thus fairly thorough, and included the three main elements that could help the dead in purgatory: masses, prayers, and alms. In pursuing salvation, the archbishop looked both up and down the cosmic hierarchy, seeking help from the saints, nuns, and poor. For their help, he offered them honor, improved religious services, and material support respectively.

The mass was meant ‘for the benefit of our soul and the souls of our parents’ (pro anima nostra et parentum nostrorum). (Click on the image for a larger version.)

Stephen Werronen is a visiting scholar at the Arnamagnæan Institute.