Naked Angels and Stolen Herring in AM 79 4to

AM 79 4to is a particularly beautiful part of the Arnamagnæan Manuscript Collection. The manuscript is lavishly decorated and written in a hand so neat, your English teacher would be jealous. Furthermore, AM 79 4to gives us a unique insight into medieval law and the use of law texts. 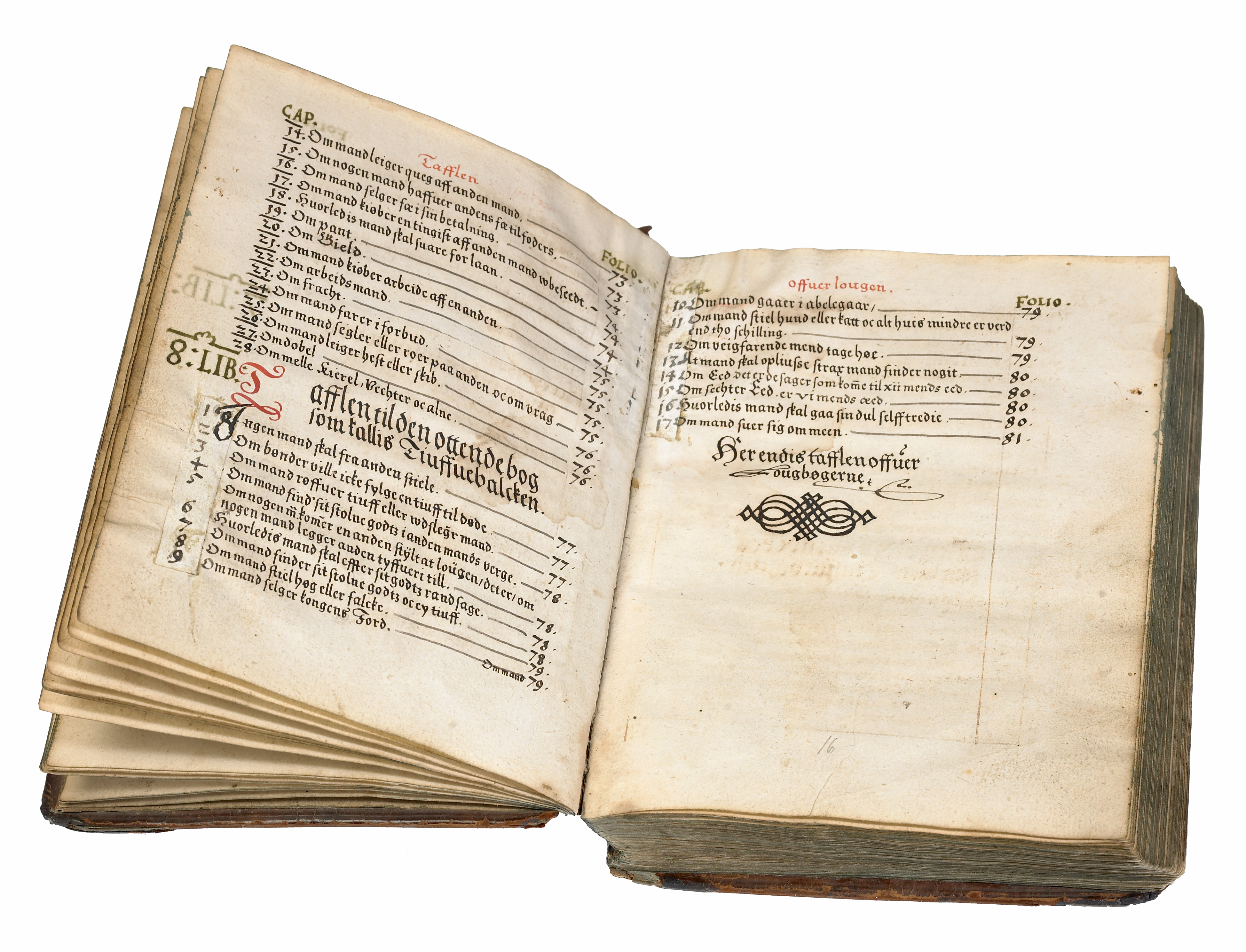 The manuscript of the month is AM 79 4to, a Danish-Norwegian legal manuscript from the end of the 1500s. A Danish translation of King Magnus the Lawmender’s Norwegian National Law and corresponding statutes make up the majority of the manuscript, but additionally, the large book of 210 leaves contains some later additions of Danish royal decrees and commentary on the decisions made during the so-called ‘Herredag’ (a meeting between the king and his nobles) in Bergen in 1604.

We do not know how Árni Magnússon got hold of the manuscript, but it is thought to have been written in Norway and later brought to Denmark. The manuscript is made of paper and has a leather binding with blind tooling, on which there had been a closing mechanism at some point. Many of the leaves are blank, and the last part of the manuscript was written later than the first and in two different hands.

There are several elements in AM 79 4to that tell us about the usage of the manuscript. For instance, there are traces of (small tabs often made from leather or silk, fastened to specific pages to serve as a bookmark) that had been glued to the fore-edge of the first leaf for each new section of the law. This indicates there had been a need to find specific pages easily, and so the were an advantage when using the book. Especially leather had a tendency to come loose over time, so it may very well have been this type of tab in the manuscript originally. Many comments have been written in the margins in the part of the book that contains King Magnus’ National Law,  and several paragraphs have been crossed over or corrected in other ways. The book was thus used and adjusted over time as the law changed. 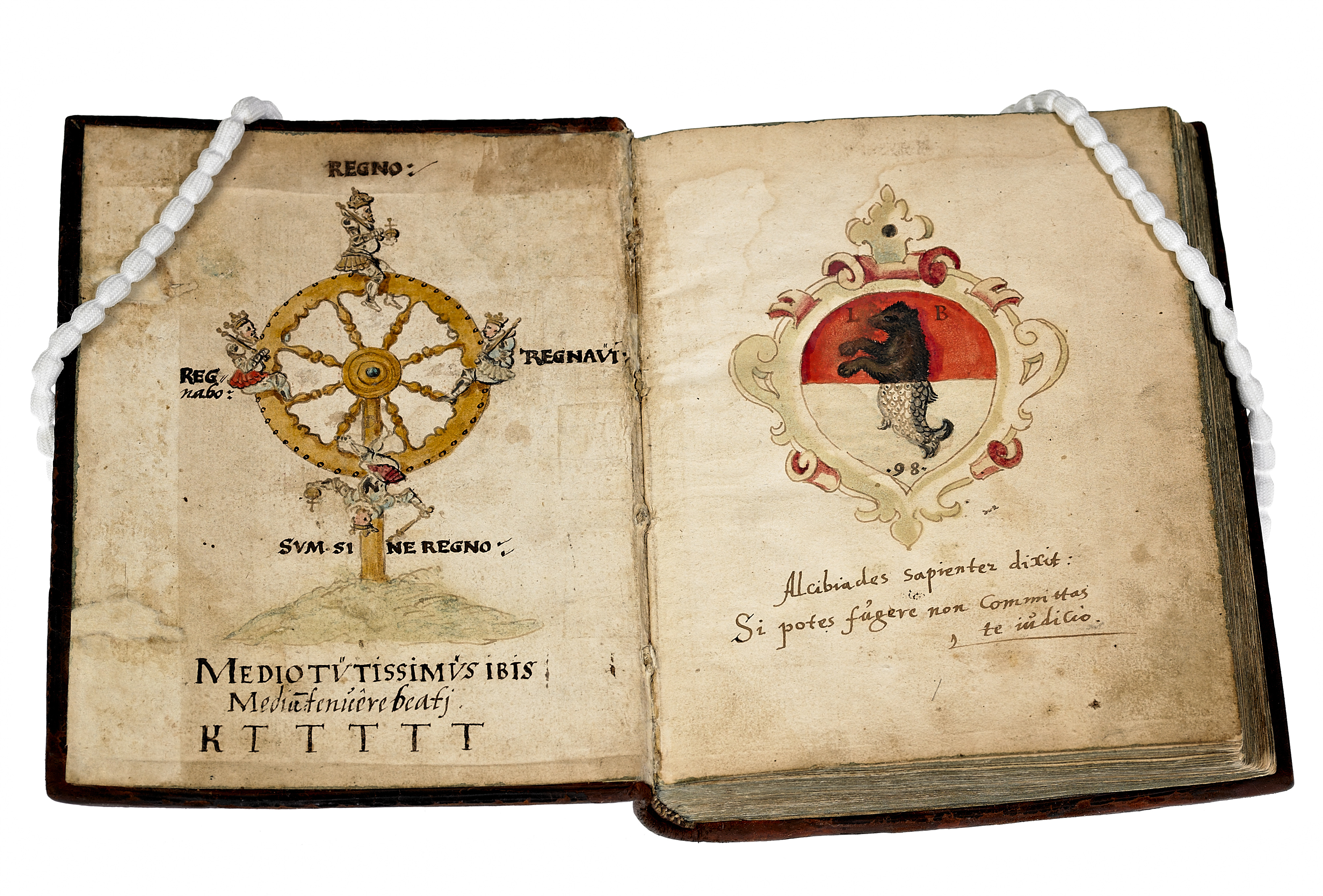 Pride before the fall

The illuminations in the manuscript almost deserve a dissertation of their own, since they have quite the tale to tell us. First and foremost, they are characterized by reminding the reader of the temporary nature of but are also noteworthy because of their size and level of detail.

The manuscript begins with two miniatures – that is, full-page illustrations. On the pastedown is a golden wheel, on which four kings reside. The wheel is held up by a pole that emerges from a grassy hill. Each of the four kings has, aside from a shiny round belly, a scepter and an orb, and is placed in a different position on the wheel. The four poses and the facial expressions of the kings represent four stages of life; on the top, on the way down, on the bottom and on the way up. The motif, known as rota fortuna, is accompanied by a quote by Ovid: ”Medio tutissimus ibis” (You will be safest in the middle) and a quote of unknown origin: ”Medium tenuere beati” (The middle path is best). Both quotes remind us that the most advisable in life is to stay centered.

The leaf opposite to the wheel of fortune is decorated more simply. In a neat frame is a coat of arms with a peculiar animal. The upper half of the animal's body is a bear, while the lower half is a fish. The coat of arms is split in half where bear body meets fish tail, and at the head of the bear the background is red, at the fish tail it is white. Around the head are the initials ”L B” and under the tail the number “98”. The coat of arms is not known from anywhere else and might be made for the occasion. What the initials “L B” stand for is also unknown. 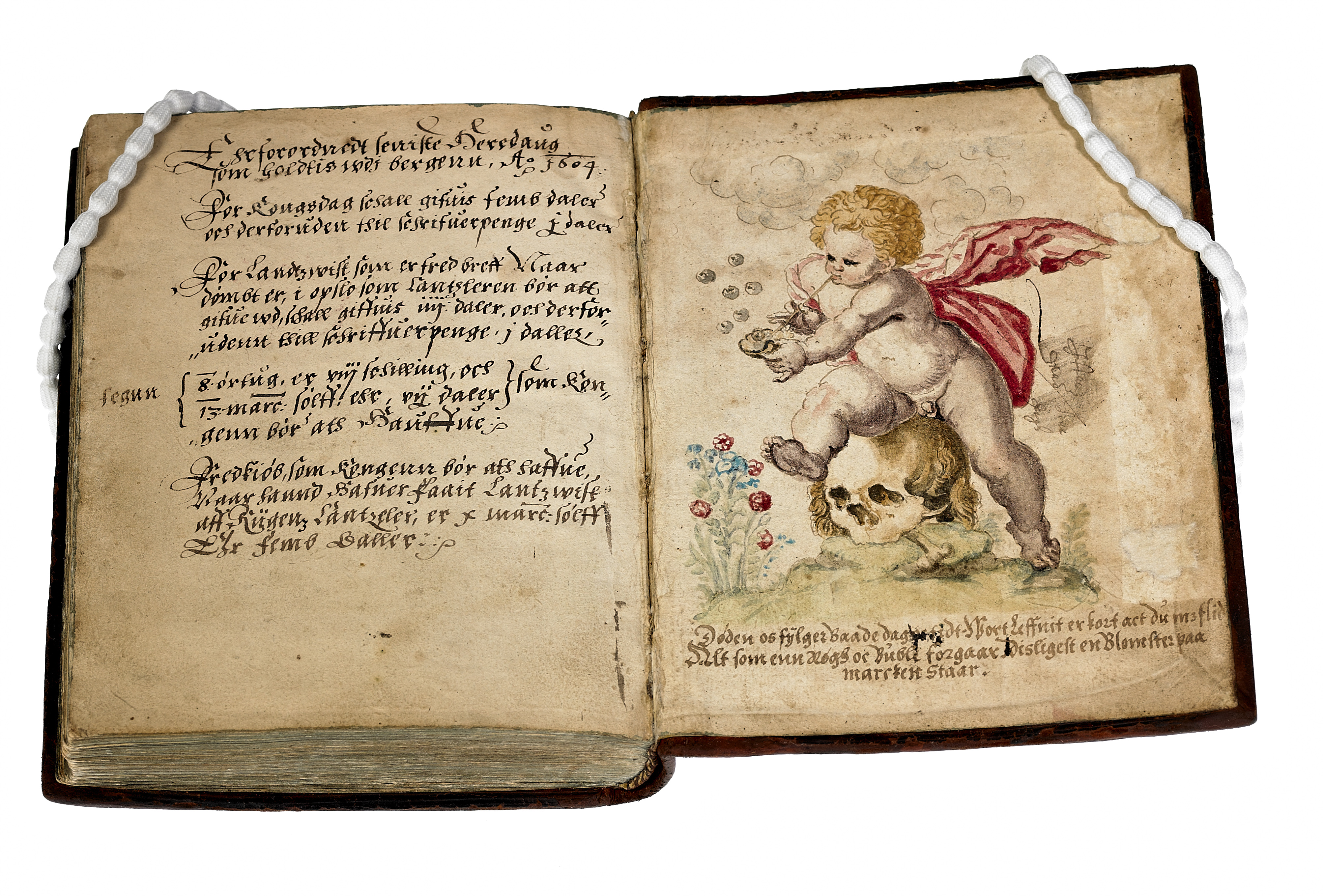 (Death us follows both daily and often. Our lifetime is short, take heed with diligence. Everything like smoke and bubbles vanishes juast as a flower standing in the field.)

This profound quote is written on the last page of the book (on the back pastedown) and belongs to the elaborate illustration above it. The motif is the so-called Homo Bulla (Man is a bubble), a well-known vanitas motif, where a naked boy sitting on a cranium blows bubbles from a seashell. The boy is wearing a cape which is being blown upwards by the wind, thus creating the outline of angel wings. Around the boy is smoke and flowers and combined with the quote, all to remind us of the impermanence of man.

This way the reader, both before and after reading the law text, is reminded of death breathing down our necks. How exactly this relates to the law text is more unclear, but if nothing else, the reader is hereby equipped with a certain humbleness in relation to the reading.

Even though the decorations in the manuscript are alluring, it would be a shame to forget the textual content. This is, as mentioned, mostly King Magnus the Lawmender’s National Law, which took effect in 1274 and was translated to Danish in the 1500s, when Norway was a part of the Danish kingdom. The laws give us a unique insight into medieval society, and can almost be considered a complete guide to medieval life. Amongst other things, we can learn what happens ”Om mand ligger med Ectemands Quinde” (If a man lies with a lawfully-wedded woman; f. 44r), ”Om galen mand bryder sig aff fengsell” (If a madman breaks out of prison; f. 35v) and ”Om mand taler wbequemelig” (If a man speaks unbecomingly; f. 43r).

More peculiar laws are also present, some of which we shall take a closer look at; for instance ” mand Ulffue och Biørne” (How one should shoot wolves and bears; ff. 65r-66v). This law turns out to be favorable for hunters of bears and wolves, since it is completely fine to shoot however many you like, unless the bear is in hibernation, or if you shoot in another man’s forest. In that case, you will have to return the bear to its rightful owner. The same principle happens to go for herring, which you will also have to give back, if you have taken them from someone else’s net (ff. 84v-85r).

If it’s a cat you stole, however, the matter is quite different. Cats, dogs, knives, belts and anything else with a value of than two shillings are not worth returning. You get to keep the but have to pay a fine to the king and to the owner of the cat. Anyone may call you a thief, which is a shame, but then at least you have the cat (f. 103v).

If your teeth are dear to you, I have bad news, if you happen to have bitten somebody. If you have done so, you must be ashamed of yourself for behaving like such an animal, and thereafter you must be brought to the thingstead for someone to ”bryde hans fremtender aff hans hoffuit” (break [your] front teeth from [your] head; f. 38v). You may, however, walk away with front teeth and just pay a fine to the person you bit, if it can be proved that you did it out of necessity.

In King Magnus’ National Law there are also examples of moral crimes, such as for instance seen in the paragraph ”Om mand finder hos sin , ” (If a man finds his wife, mother or daughter; f. 34r) it is explained that it is completely legal to kill a man if you have found him in bed with your wife, mother, daughter, sister, stepmother, daughter-in-law or sister-in-law. That only applies, though, if you made sure to gather witnesses to confirm your findings. In that case you must, as soon as you have killed the man, call an assembly, declare what you have done and present your witnesses. The law speaks nothing of the consequences for the woman involved. 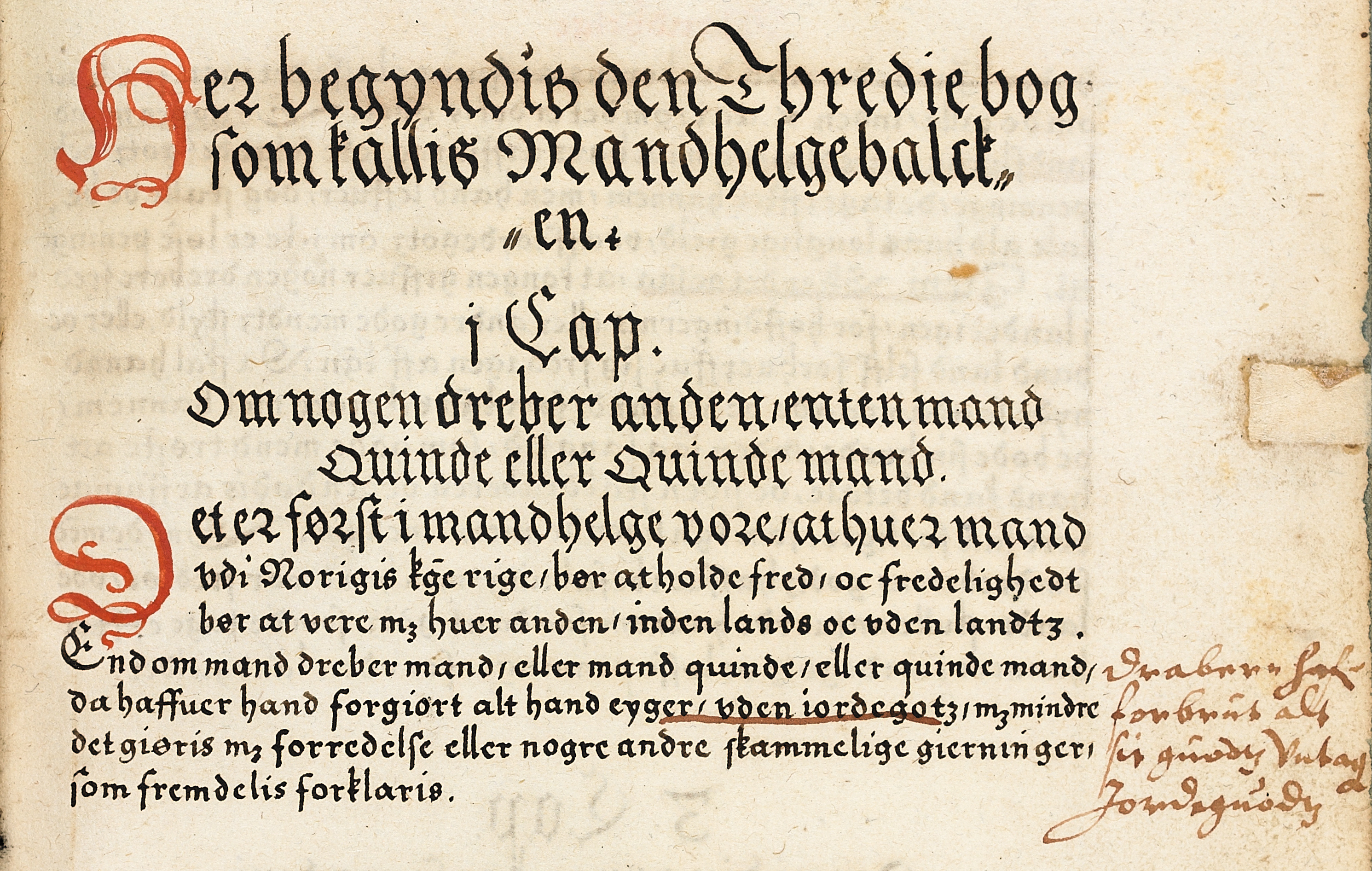 After all these illegalities, we shall lastly take a look at a friendly reminder from the paragraph on manslaughter: ”Huer mand udi Norigis konge rige, bør at holde fred, oc fredelighedt bør at være med huer anden, inden lands oc uden landtz” (Everyone in Norway’s kingdom shall make peace and be peaceful with each other, both at home and abroad; f. 32r).

Should there be anything else, you seek the answer to, I highly recommend taking a look through the book on handrit.org.

Pernille Ellyton is an M.A. student connected to the Arnamagnæan Collection.

Contribute to Manuscript of the Month

Have something to say about one or more manuscripts in the Arnamagnæn Collection? Contribute to the column Manuscript of the Month to get your research out there! Write to Seán Vrieland (sean.vrieland@hum.ku.dk) for more details.