Rask 33 not only contains two tales from a not so distant past, it is also a reminder to pay attention when (re-)binding books.

Rask 33 39r: Large initial at the beginning of part 2 of the saga. (Click on the picture for a larger version.)

Rask 33 is a small paper manuscript from seventeenth-century Iceland and one of those in the Arnamagnæan Collection that once belonged to the Danish linguist Rasmus Christian Rask (1787–1832). Rask 33 transmits just two texts. The first is an apparently abridged copy of the older redaction of Mágus saga jarls (an Old Norse romance based on French sources). The second is the short tale Þóris þáttr hasts og Bárðar birtu (a postmedieval Íslendingaþáttur). The two texts, though both copied around the end of the seventeenth century, are the work of different scribes, on paper with different watermarks, but which were subsequently bound together as one volume. This article focuses on the copy of Mágus saga jarls, which comprises the majority of Rask 33, and whose scribe, Þórður Jónsson, is known by name.

Þórður’s work, which can be recognised by his distinctive script and his tendency to sign many of the copies he made, can also be seen in several other early modern Icelandic manuscripts containing both literature and historical records. Both Þórður and his son Jón were prolific scribes in the second half of the seventeenth century. In particular, they copied a significant amount of material for the wealthy landowner Magnús Jónsson, who lived on the island of Vigur in Iceland’s Westfjords. Þórður’s copy of Mágus saga jarls in Rask 33 is reminiscent of some of work done for Magnús Jónsson, but it cannot yet be connected to him with certainty.

A romance on bad paper 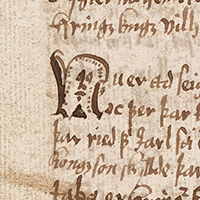 Rask 33 52v: Detail of a face in the initial at the start of a chapter. (Click on the picture for a larger version.)

Above and beyond his name, Þórður Jónsson leaves a number of other personal touches on his copy of the romance. The text is divided into two parts, each beginning with embellished initials and titles, and each part ending with a colophon. Several initials at the beginnings of chapters are also illustrated with simple, yet charming faces. The colophons at the middle and end of the saga indicate that Þórður carried out his task during the winter of 1680 at Eyri by Skötufjörður in the Westfjords (not far from Vigur), during the months of November (probably) and December (certainly). Þórður had been copying manuscripts since as early as the 1650s, so this work in 1680 may have been among his last. He finished the first part of the text (fols 1r–38v) on 3 December and the second part (fols 39r–72r) seventeen days later. As he signs his name and notes this date on fol. 72r, he also provides an evaluation of the quality of his writing materials: he copied the saga ‘on bad paper’ (ä slæ̈mumm pappijr). It is hard to know exactly what Þórður meant by this (and whether this comment reflects his own standards or those of his patron), but there are indeed a few leaves throughout the manuscript where the ink bleeds through the paper, making the text a bit more difficult to read than it is on other leaves.

Rask 33 is also codicologically interesting. A slim quarto of 76 leaves, it is immediately clear upon opening that the romance it contains once belonged to a larger manuscript. Fol. 1r contains, in addition to the beginning of Mágus saga jarls, the quire signature ‘O’ in the bottom margin. Further sequential quire signatures run throughout this text from O to Y. By contrast, the final four leaves of Rask 33 (preserving Þóris þáttr hasts og Bárðar birtu) contain no quire signatures, and were as already noted the work of an unknown scribe, bound with Mágus saga jarls at a later date. Perhaps this occurred when Þórður’s copy of Mágus saga jarls was separated from its original manuscript, which included Quires A through M.

A binding error makes for a jumbled story

Mágus saga jarls was therefore produced along with at least one other text in a larger manuscript. Furthermore, its subsequent binding (after being parted) seems to have resulted in one of the quires being bound with some of the leaves in the wrong order. We can see even just in the quire signatures that there is something wrong with the manuscript’s collation. Quire P is composed of four bifolia — i.e. of four folded sheets making eight leaves (sixteen pages) when assembled. The third bifolium has been incorrectly inserted, resulting in a section of the saga that is now out of sync. Because the bifolia are marked P (fol. 9r), P2 (fol. 10r), P3 (fol. 13r), P4 (fol. 11r), and P5 (fol. 12r, on the inside recto fold of the 11r bifolium), we can see how they should be rearranged: 9-10-13-11-12-14, etc. If we then also look at the text, another clue is found in the catchwords — one more of the scribe’s precautions to prevent accidental misbinding, indicating at the bottom of each page what should follow at the top of the next. They would only match up correctly if the leaves were rearranged as just noted. Fol. 10v’s catchwords correspond to the top of fol. 13r, for example, and those on fol. 13v match up with the top of fol. 11r.

Overall, we find much more in Rask 33 than just a collection of plain, brown leaves from the end of the 1600s. The scribe’s doodles and colophons give a sense of his personality, and an accidental binding error in the copy’s later history indicate that this medieval romance continued to be read in early modern Iceland and beyond, even after having been separated from its original postmedieval manuscript context.

Rask 33 72r: The scribe signs his name and notes the date on fol. 72r and also provides an evaluation of the quality of his writing materials: he copied the saga ‘on bad paper’ (ä slæ̈mumm pappijr). (Click on the picture for a larger version.)