A legal text in a manuscript from the middle ages can be difficult for a present-day reader to understand, and the same seems to have been the case for people at the time, too. This problem has been solved in this manuscript with explanatory glosses, written by the bishop Knud Mikkelsen at the end of the 15th century.

AM 16 8vo contains The Law of Jutland. Pictured here is its famous prologue, which reads "Meth logh scal man landh bygge" [With law shall the country be built] (Click on the picture for a larger version.)

AM 16 8vo is a small thick parchment manuscript of 247 leaves containing The Law of Jutland and other law texts originating in the medieval period. The bulk of the manuscript is written in the last quarter of the 15th century with the remainder added during the 16th century.

There are many Danish law manuscripts preserved from this period, but AM 16 8vo differs from most in that it contains both The Law of Jutland and explanatory glosses. The layout of the contents on each page is also very different from most other law manuscripts, as the law text itself is surrounded by the explanatory glosses in the shape of a squared frame. This specific layout is consciously designed to look the way it does because the glosses in the frame are meant as assistance when reading and understanding the law text. 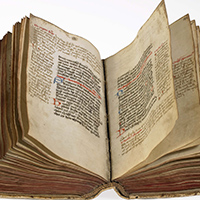 Click on the photo to see a bigger version.

This way of arranging the text is inspired by older European manuscripts containing Christian material or Roman law, and such a layout is often used with didactic purpose, i.e. in connection with the study of a subject. This layout is related to a special type of authority in the medieval period, as it is also found in manuscripts with biblical contents associated with the large European cathedral schools.

The manuscript contains the text The Law of Jutland, in addition to Thord’s Articles, which consist of Latin explanations to words, some legal paragraphs and a description of the legal practice. Besides this, the manuscripts contains Bishop Knud’s Glosses, which are comments in Latin on how the different chapters in the law have been altered or expanded, as well as guidelines to how contemporary legal practice is. These comments consist of explanations of concepts in the text, comparisons between the different paragraphs and a reference to general legal argumentation. If one wishes to obtain a thorough understanding of the law text, it is obvious that these glosses are an invaluable help both for the medieval and the present-day reader.

The author of the glosses is Knud Mikkelsen, who, besides being bishop in Viborg, was also educated as doctor juris utriusque, i.e. a doctor of both Roman and canon law. In the course of his education Knud Mikkelsen most likely studied law manuscripts which made use of the frame of glosses, so it is possible that this was the source of his inspiration for the idea of using the same sort of glosses for the Danish law, The Law of Jutland. He was a learned scholar in the medieval sense, and today he is equally famous for his work within law and state as he is for his position as bishop.

Some of the same glosses are also found in the manuscript AM 12 8vo, but there they are not accompanying the law but kept as a separate text. This manuscript is called Bishop Knud’s Sketchbook because it gives the impression of a text swiftly written without much attention or energy placed upon the decorative elements of the layout.

This way of arranging the text is inspired by older European manuscripts containing Christian material or Roman law, and such a layout is often used with didactic purpose. (Click on the picture for a larger version.)

The manuscript’s many owners

Thanks to several inscriptions on the first and last leaves of the manuscript, a good deal is known about who owned the law manuscript in the beginning of the 17th century. Based on the information in these inscriptions one can deduce that the manuscript had been passed on every few years from one person to the next, occasionally a family member such as a brother or brother-in-law. Sometimes a bit of extra information has even been added about the changing owners, such as their profession and place of residence.