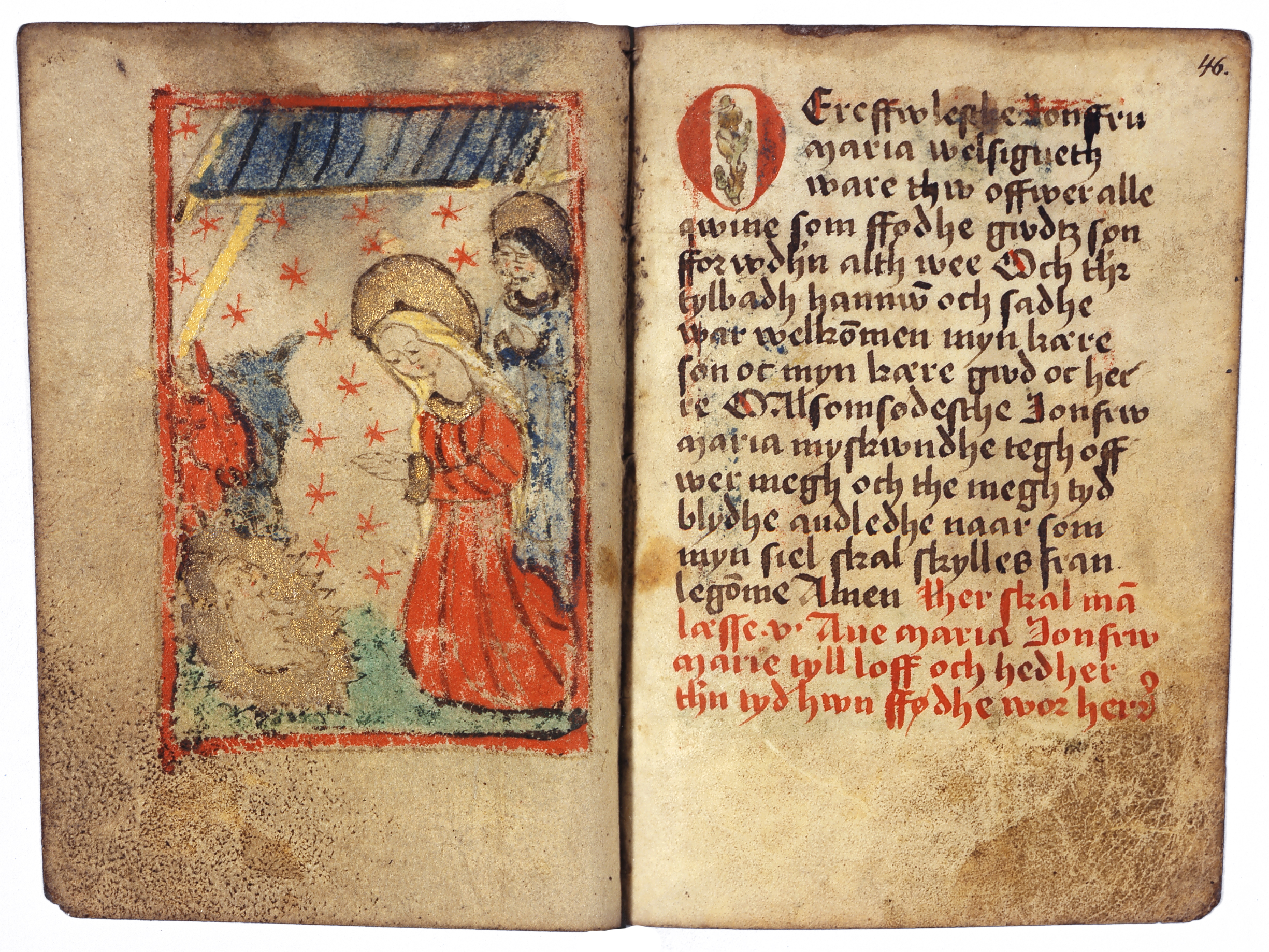 ‘Dear Lord, almighty Father and Son and Holy Spirit, give your handmaiden Marine Jespersdatter strength to overcome all my foes.’ With these words begins the prayer for the owner of this small Danish prayer book from the early sixteenth century, a prayer addressed to the Holy Trinity asking for deliverance from evil. The owner, Marine, may have been from the noble family of Lunov from Jutland, referred to in Christian II’s register of documents and letters as ‘the betrothed maiden Marine Jespersdatter’ in 1517. The Lunov family had ties to the Birgittine abbey in Mariager, so it is possible that the prayer book was made for her in the abbey’s scriptorium.

The book contains 47 prayers in Danish accompanied by 48 painted full-page miniatures – the only late medieval prayer book in Scandinavia to contain such illumination. Besides the aforementioned owner’s prayer, the book also contains the popular prayers such as the (Five) Wounds of Jesus Christ, the Seven Joys and the Seven Sorrows of the Blessed Virgin Mary along with intercessions to popular saints such as Saint George and Saint Catherine of Alexandria. A number of the prayers were copied from Christiern Pedersen’s printed book of hours Vor Frue Tider, the first edition of which was published in 1514 and the second in 1517. If nothing else, Hos Korsets træ (By the Cross), the only preserved Danish translation of the Latin Marian hymn Stabat mater dolorosa, ensures the place of the prayer book in Danish literary history.

A greater part of the prayer book comprises a rosary cycle with the title Jomfru Maria og den hellige Trefoldigheds psalter (Psalter of the Virgin Mary and of the Holy Trinity). This cycle of prayers is made up of three parts, representing the main events in the lives of the Virgin Mary and Jesus Christ as related in the New Testament: childhood, passion and resurrection. Each section is composed of ten prayers preceded by an introductory prayer praising the Trinity and the Virgin Mary and followed by a prayer asking that the prayers be heard. The rosary is illustrated by a series of pictures showing the respective events. These images are placed on the left side of the opening, with the text on the facing right side. The texts of the prayers are followed by explanations, written in red ink, of how the prayers are to be read (recited). After the prayer to Mary for her visit to Elizabeth, mother of John the Baptist, it says: ‘her skwlle i læsse .v. Ave Maria for Ionfrw M<a>ries billithe som hwn søghede syn frenke elizabet’ (here you shall read five Hail Marys before the picture of the Virgin Mary when she visited her relative Elizabeth). The illustrations are executed in a style that is reminiscent of gothic wall paintings in Danish town churches, and in some motifs influence from Birgittine iconography may be seen, for example in the representation of the birth of Jesus, where the infant lies naked on the ground within a halo.

The book, which is bound in a contemporary leather binding from the sixteenth century, consists of two originally independent parts, whose separate origins can still be seen from the quire signatures and variations in the layout and decoration. The first part contains, among other things, the prayer for the owner, while the second part, which bears the title Nogle gudelige bønner (A few godly prayers) contains mainly the rosary and does not include any information on the book’s owner. One of the prayers does however indicate that the person doing the praying is a widow: ‘Gyff megh tro oc hob och kærlighed oc fred indwortys oc wdwortyss oc myn wydwe stad ath holle retthelighe’ (Grant me faith and hope and love and peace within and without and [strength] to uphold my widowhood properly).

Árni Magnússon bought the book in 1726 when the book-collector Frederik Rostgaard (1671–1745) was forced to sell off the bulk of his enormous library. Árni notes elsewhere the sales price: 1 rixdollar, 1 mark and 4 shillings. 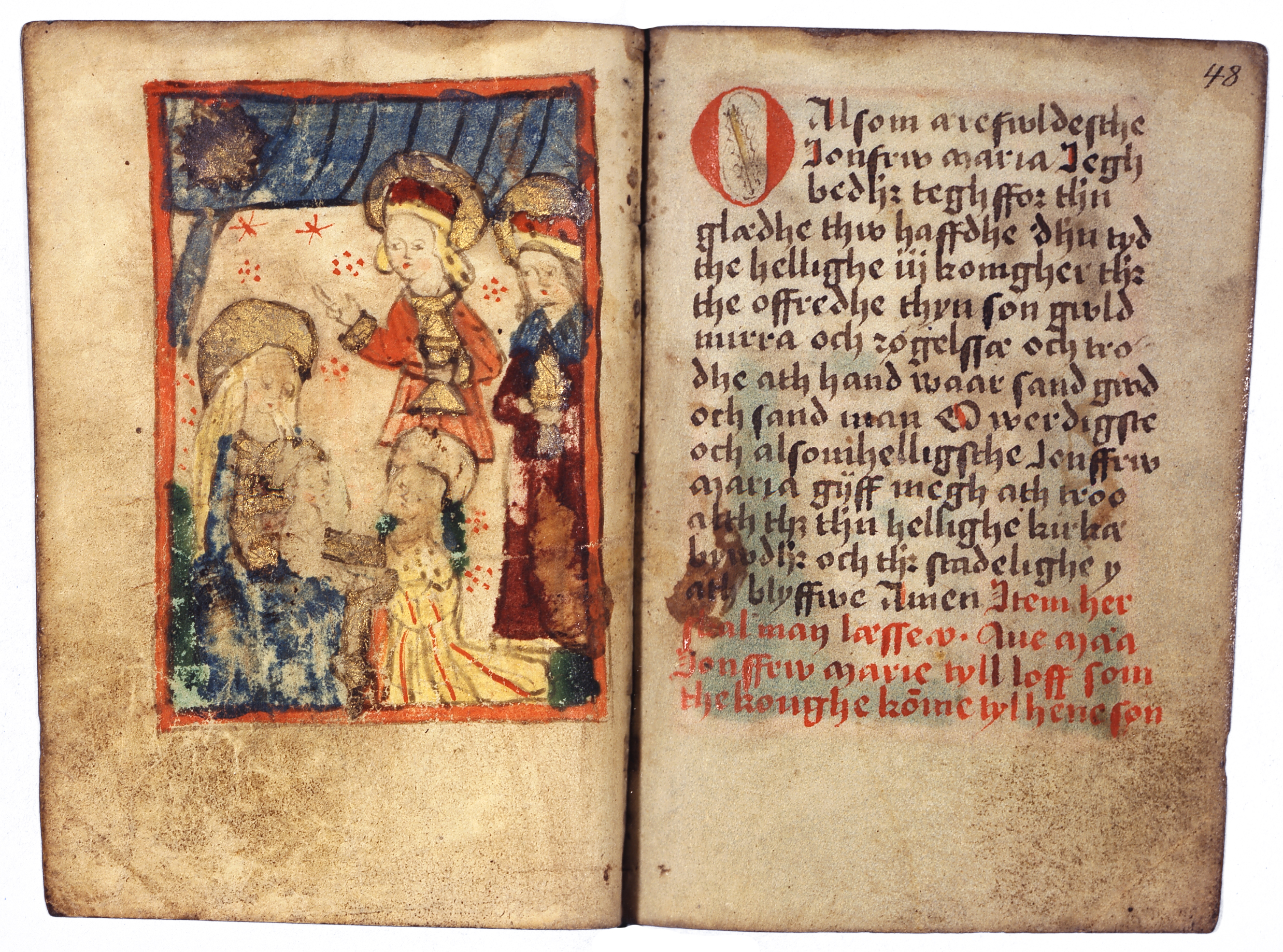