Although Árni Magnússon didn’t go out of his way to collect manuscripts of continental provenance, about 100 such wound up in his collection, including around 20 from Spain. Most of these he got from the estate of the Danish nobleman Jens Rosenkrantz (1640–1695), whose entire library, it has been claimed, he was obliged to buy in order to get hold of a single manuscript of Heimskringla, AM 45 fol., known as Codex Frisianus (see p. 54). This seems a slight exaggeration, given that Rosenkrantz had one of the largest private libraries then in existence, but there are at least 30 manuscripts in the Arnamagnæan collection which demonstrably came from Rosenkrantz’s library.

The Apocalypse of St John in Latin

One of the more interesting of these is AM 795 4to, a small quarto (20 × 13 cm) on fragile parchment containing two texts, the Apocalypse of St John (Book of Revelation) and a commentary on it by the sixth-century churchman Apringius, bishop of Pace, now Beja, in Portugal. Copies of the former, although not as numerous as those of other parts of the New Testament, nevertheless number in their thousands, whereas this, remarkably, is the only copy of the latter to have survived from the Middle Ages.

Little is known of Apringius’s life apart from what can be gleaned from the title of his work as it appears in the manuscript (shown here): ‘Incipit Tractatus in apokalipsin. Eruditissimi uiri Apringi episcopi Pacensis ecclesie’ (Here begins the commentary on the Apocalypse by the most learned man Apringius, bishop of Pace). According to Isidore of Seville, who mentions him in his De viris illustribus, Apringius flourished at the time of Theudis, the first Visigothic king of Spain (r. 531–548). Isidore describes Apringius as ‘disertus lingua et scientia eruditus’ (fluent in speech and learned in knowledge), and says that he expounded the Apocalypse ‘subtili sensu atque illustri sermone melius pene quam veteres ecclesiastici exposuisse videntur’ (with a clear meaning and plain manner of speaking, and perhaps better than older ecclesiastics had expounded it). Apringius’s commentary, or at least the parts of it which appear actually to be attributable to him, cover only the first five and the last five chapters of the Book of Revelation (Rev. 1:1-5:7 and 18:6-22:20). These were cited by the eighth-century Asturian monk Beatus of Liébana in his own well-known commentary on the Apocalypse, but Apringius’s influence on subsequent commentators was otherwise limited. Although his name was not unknown to later scholars, the work itself was for many centuries presumed lost.

The discovery of Apringius' commentary on the Apocalypse

In 1722, the German theologian and historian Johann Lauritz Mosheim (1693–1755) visited Copenhagen, where he perused the libraries of various learned men, notably Hans Gram (1685–1748) and Árni Magnússon, who was happy to show Mosheim some of his treasures. Mosheim described his experiences in a short report published later that year in Bibliotheca Bremensis. He is rather sparse on detail, but announces that among other major discoveries he has found a copy of Apringius’s commentary on the Apocalypse. This caused a minor scandal, as Mosheim’s Danish hosts were deeply offended by the offhanded way in which he presented his ‘discoveries’ to the outside world, with little or no mention of their role in the process; Hans Gram went so far as to accuse Mosheim of having plagiarised Árni Magnússon’s work.

Over a century and a half later, another German theo-logian, Wilhelm Bousset (1865–1920), following up on Mosheim’s references to, as he thought, a manuscript of the commentary ‘in einer Holsteiner Bibliothek’ (as he says), found a description of AM 795 4to in Kristian Kålund’s then recently published catalogue of the Arnamagnæan Collection and announced his own discovery of the manuscript in an article published in 1895. The commentary’s first editor, Marius Férotin, had already discovered the text three years earlier, however, even though his edition didn’t appear until 1900. There have been four editions since, the most recent appearing in 2007.

This last, seemingly incomprehensible, line merely repeats the previous line, ‘Deo gracias ago; finito labore isto’ (I give thanks to God; this effort is finished), using a simple displacement cipher, where b is used for a, c for b and so on.

The script is (late) Carolingian minuscule. A note added in a seventeenth-century hand below the final rubric states that the text was copied from an older manuscript in Barcelona in ‘MXXXXIJ’, i.e. 1042. Although accepted by many scholars, including the most recent editors, on palaeographical grounds this can hardly be correct. The year, written ‘MXXXXIJ’, appears however to have been altered from ‘MCXXXIJ’, 1132, which, if the manuscript was indeed written in Barcelona, is not impossible.

The Spanish orientalist Benito Arias Montano (1527– 1598) has also written his name on this final leaf and may be presumed to have owned the manuscript. As Arias Montano’s manuscripts otherwise went to the library at San Lorenzo de El Escorial, where he served as librarian in his later years, it is unclear how this particular manuscript wound up in Denmark. The note previously referred to, which there is no reason to think was written anywhere other than in Spain, also states that the manuscript was bought ‘anno M.Dc. xvj’, i.e. 1616. That the manuscript was still in Spain in the beginning of the seventeenth century can also be seen from the fact that there are several copies of it made in and around Seville in the first decades of the seventeenth century by local scholars. The Spanish bibliographer and erudite Nicolás António mentions in his Biblioteca hispana vetus, published in 1672, that Luis de Sanllorente y Castro (Ludovicus de S. Laurentio), prebendary of Seville Cathedral, had begun work on an edition of Apringius which was never published, presumably as it was unfinished at his death in 1621. António says specifically that Sanllorente was working from an old codex written in Barcelona, so it seems clear that this must have been our manuscript.

Somehow the manuscript came into the possession of Holger Parsberg (1636–1692), Danish nobleman and book collector, whose name appears on the front pastedown and in the lower margin of f. 1r along with the dates 1680 and 1682. Following Parsberg’s death, the manuscript was bought by Jens Rosenkrantz when Parsberg’s library was auctioned off on 23 October 1693. It was subsequently acquired by Árni Magnússon, as mentioned, along with many other manuscripts, from Rosenkrantz’s estate, either in 1696 or 1697.

As if this weren’t enough, the entire codex is a palimpsest, in other words written on used parchment which had been scraped clean. Although the underlying text is now in most places all but unreadable, there appear to be sections from four separate manuscripts, one of them a Forum Iudicum – the set of laws promulgated by the Visigothic king Chindasuinth in 642–643 – written in early Visigothic minuscule from the ninth century. This means that the parchment in AM 795 4to – a mixture of goat, sheep and calfskin – is, some of it at least, older by several centuries than anything else in the Arnamagnæan Collection. 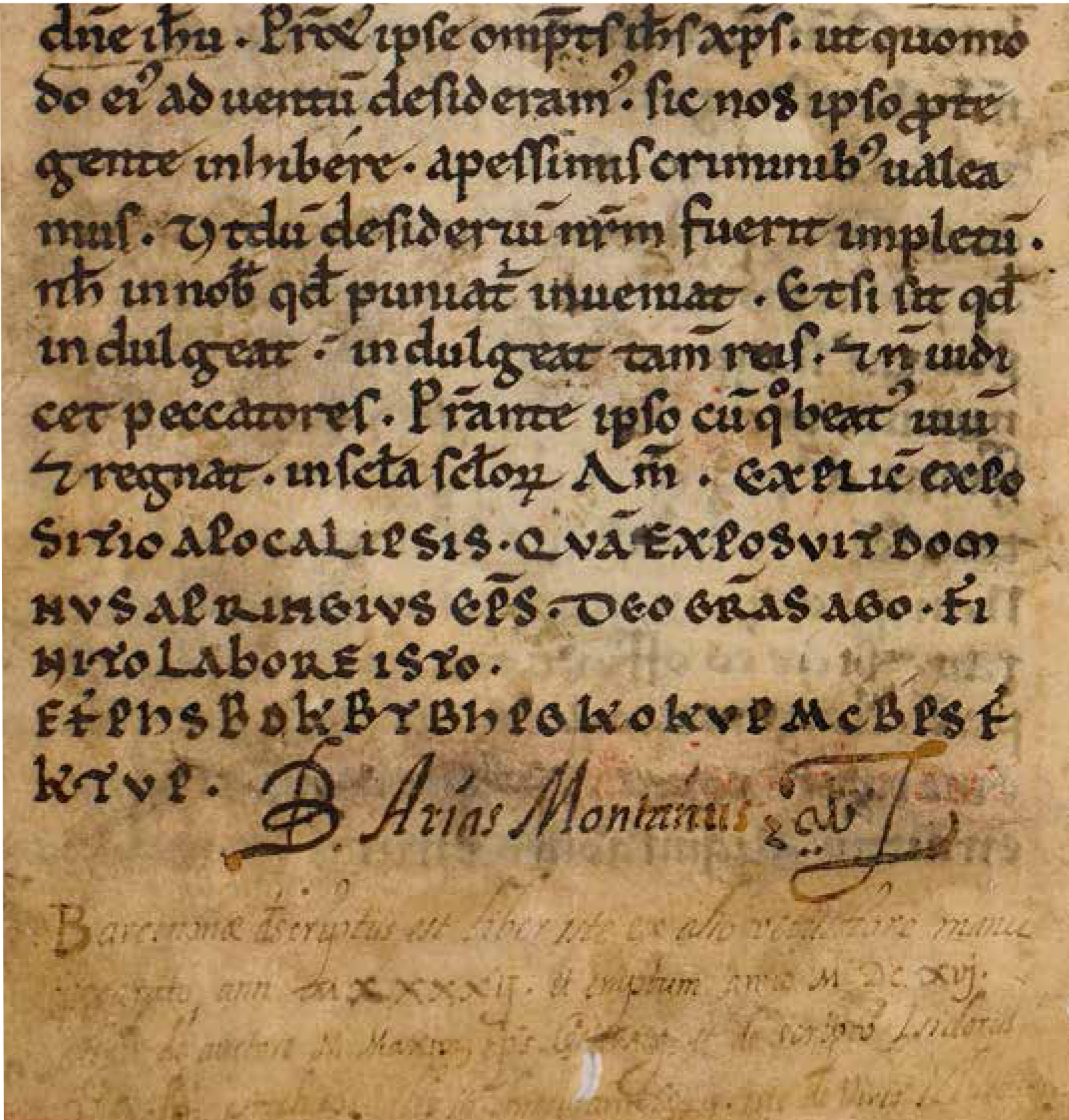