Manuscript of the Month, Easter

Calendars form one of the main categories of medieval manuscripts, owing to the important role they played in medieval liturgy, recording the basic structure of the liturgical year.

The calendar formerly preceded the psalter, identified as AM Access 7d, Hs 112 (known as Psalter VII), which today comprises only eleven leaves: three bifolia and five single leaves. The leaves have been trimmed to various sizes, since they served as book covers for other manuscripts in the Arnamagnæan Collection, from large folios to tiny duodecimos (AM 180d fol., AM 252 4to, AM 176 8vo, AM 177 8vo, AM 474 12mo.) (Andersen 2008).

A full-page miniature on f. 8v of the calendar presents the scene of crucifixion. It depicts Jesus on the cross, with Mary standing to the right of Christ and St. John to the left. In the upper part of the miniature the sun and moon are symbolically represented. Some stylistic features of this miniature, such as the spiral protuberances flourishing from the cross, a row of small circles decorating the halos of Mary and St. John and St. John's hair arrangement, have parallels in English psalter illuminations. The miniature must have immediately preceded the psalter, which is now detached from the calendar, as previously mentioned (Halldór Hermannsson 1935, 11; Liepe 2009, 199–202, 217). 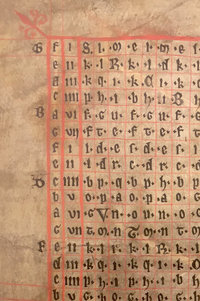 Easter table giving the dates of Easter for the years 1140-1671. (Click on the image for a larger version.)

On f. 7v of the calendar there is a red-framed table with sparse floral decorations in each corner, which looks like a modern word search puzzle. It contains two red-framed columns on the left-hand side of the table proceeded by the large area of nineteen columns and twenty-eight rows. It is an Easter Table, which served as a "cheat sheet" allowing medieval users of the calendar to determine the date of the Easter. It gives dates of Easter for the years 1140-1671 using the lunar letters.

Associated with the manuscript is a slip in Árni's Magnússon's hand which gives a brief description of the manuscript's provenience:

Björn Þorleifsson gave me this [book]. It preceded a Latin psalter. 1703. Probably originating from Skinnastaðir.

As stated, Árni Magnússon received the manuscripts in 1703 from Björn Þorleifsson, Bishop of Hólar from 1697 to 1710. At the time the manuscript came into Árni Magnússon's possession it contained both a psalter and a calendar. It was certainly the famous manuscript collector himself who separated the calendar from the psalter and used parchment leaves of the latter for bookbinding or as covers for other books in his collection (Overgaard 2003).

Numerous additions in the manuscript allow the history of its ownership to be traced back to the second half of the fifteenth century. A note on f. 8r, which today is mostly illegible, informs us for example that the manuscript was donated by Eiríkur Loptsson from Grund to the monastery at Munkaþverá in year 1469.

Several younger additions contain obituaries, which allow us to trace the later history of the manuscripts back to a family connected to two farms in north-eastern Iceland (Reykjahlíð and Skinnastaðir). For example, on f. 2r, the page with the month of February, by the date XIIII Kal. Mar (16th of February) there is an addition in a younger hand which reads:

Nikulás Þorsteinsson was keeper (klausturhaldari) of the monastery in Munkaþverá in Northern Iceland—the same monastery to which in 1469 Eiríkur Loptsson donated the manuscript. The names and dates of deaths of the members of his family can be found in many places in the calendar. This could be one of the reasons why Árni Magnússon decided to spare the calendar, as it could be used as a source for the history of northern Iceland.

Several names and dates of people connected to the manuscript have been added in at a later date. This makes the calendar a source for the history of northern Iceland. (Click on the imange for a larger version.)