AM 370 fol. Antiquities from the Bergen District 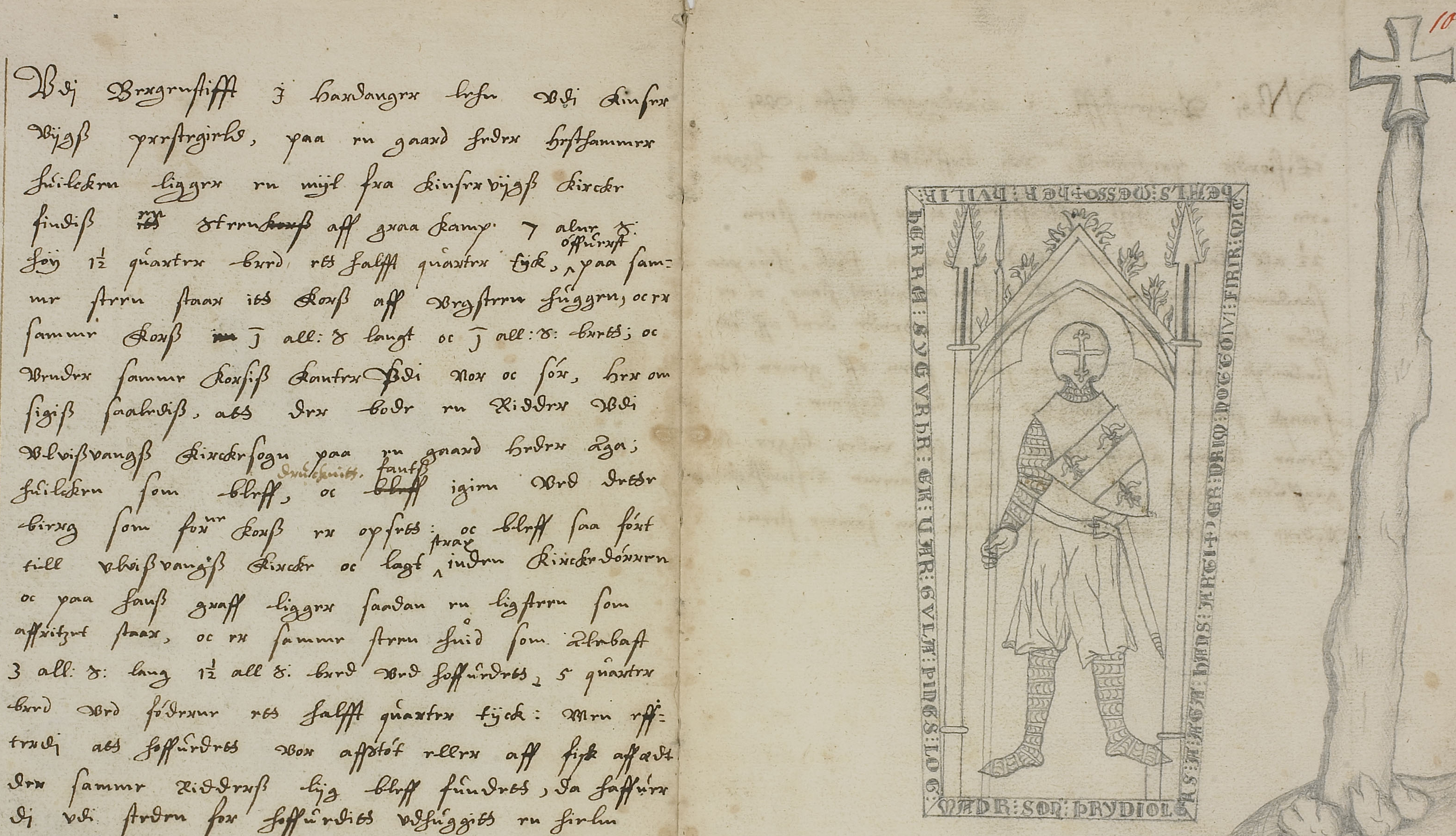 AM 370 fol. 9v-10r: Picture of the gravestone made for a knight whose headless body was found near the cliff with the cross. Instead of a head, which was missing, a visor with a cross was made (Click on the image for a larger version).

In the Arnamagnæan collection, there are six illustrated manuscripts, AM 366 fol.-AM 371 fol., all addressed to the King’s physician, natural historian and antiquarian, Ole Worm (1588-1654). What all these manuscripts have in common is that they contain some of the earliest written testimonies and illustrations of runic inscriptions and petroglyphs in the areas then under Danish rule. including ‘Skånelandet’ (Scania, Halland and Blekinge in Sweden) along with the colony of Norway with Bohuslän, which was then a part of Norway.

Ole Worm, who was interested in early Danish history, in 1622 received a letter of introduction to the bishops of Denmark and Norway from the king of Denmark, in which they were asked to conduct searches for ancient relics and runic objects. He later used the information obtained from these as sources for the first Danish  work of runology, Monumenta Danica from 1646.

AM 370 fol. differs from the other runic booklets, firstly by being the earliest of the six manuscripts, and secondly by having considerably fewer records of runes. Where the other booklets almost exclusively contain records of runic inscriptions and other grave inscriptions, AM 370 fol. also contains records of churches, ruins, graves with standing stones, stone crosses and shields. 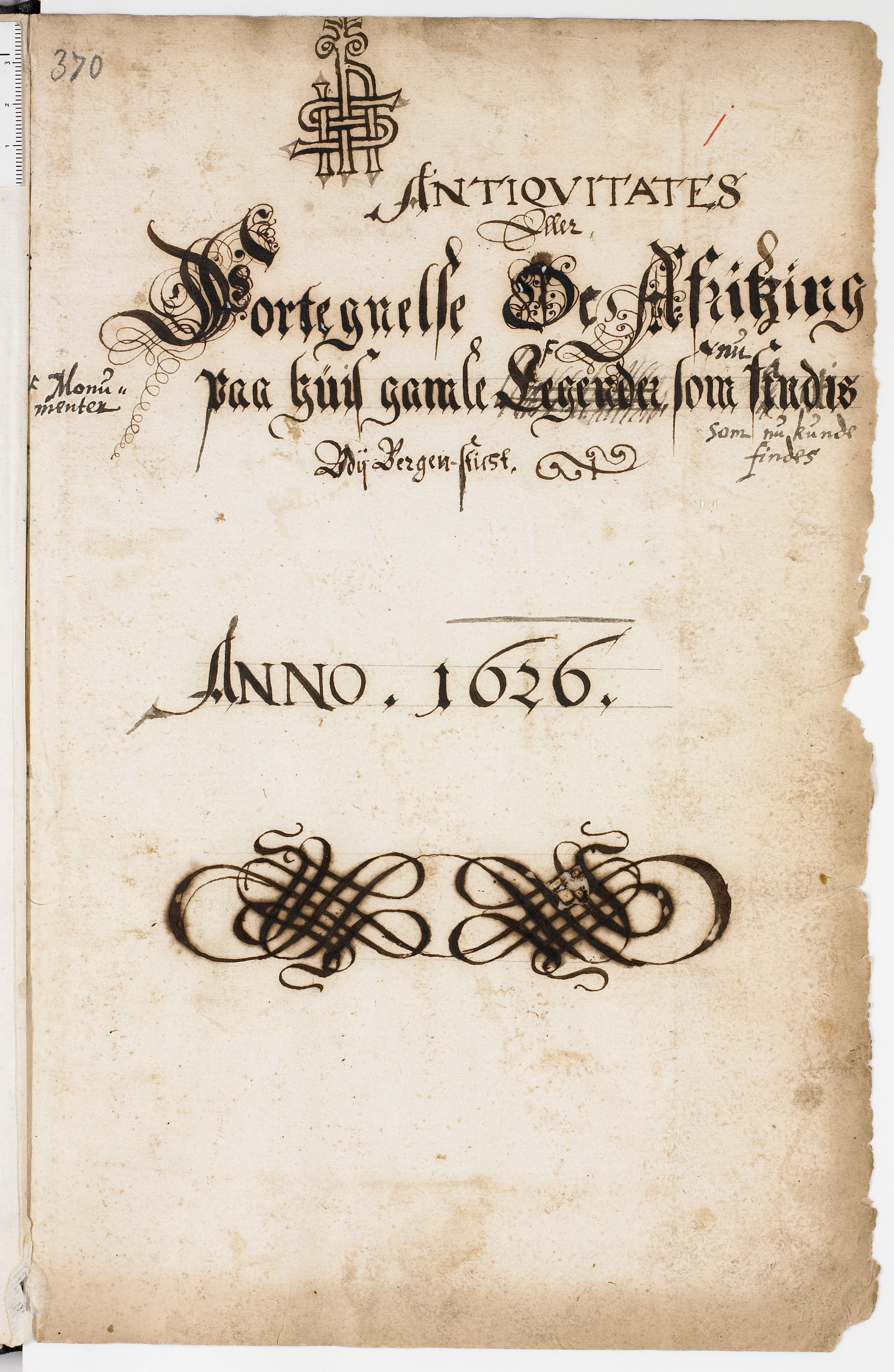 AM 370 fol. title leaf; 1r: ANTIQVITATES Eller Fortegnelse Oc Afritzing paa huis gamle Legender ſom nu findis Vdij Bergen ſticht. Anno 1626. The word legender and findis has been crossed out by a contemporary hand and corrected to monumenter and som nu kunde finds, respectively. Maybe because of a disagreement on what was most important in the manuscript (Click on the image for a larger version).

AM 370 fol. is a thin folio booklet, consisting of 32 leaves, of which the final five are left blank. The manuscript describes 35 different ancient texts, and the typographical layout is that of a published book, with the description of a relic (or two) on the verso-side of the leaf and a matching illustration on the following leaf’s recto-side.

At the creation of the manuscript in 1626, we find ourselves in the Bergen district in Norway. Four years after the king’s letter from 1622, Niels Påske, bishop of Bergen, sent out the recently graduated Jon Skonvig, together with the secretary of the cathedral chapter, Samuel Bugge, to examine and document monuments in Bergen District. The first part of the manuscript, fols 1r-12v, is a result of a close collaboration between Bugge and Skonvig. Skonvig writes the texts, while Bugge is responsible for the illustrations and the title page. The second part of the manuscript is written entirely by Skonvig, except fol. 26v, where we find a pasted slip with a picture and a text about a carved stone head of John the Baptist which was found on the outside of the old cathedral of Bergen.

Many of the old stories preserved in the manuscript are derived from  oral tradition. Broadly speaking, they revolve either around religious subjects, or around death and misfortune. The religious texts include stories like the one of a blind man who hears the church bells ringing and he regains his sight. Other stories deal with saints, giants or kings building churches. There is also a story of a cross that becomes very heavy when one tries to remove it from its rightful place, and which also heals the sick and disabled. A cross was supposedly raised by Olaf II of Norway, when he introduced Christianity to Norway, and he was said to have been shot in front of two other crosses, whereby a lot of red spots appeared on them.

The more secular texts often revolve around death and misfortune. There is a story telling of a custom in which two men who have become enemies will stand on a pile of stones and throw stones at each other until one of them dies. Another legend concerns one of Norway’s national parks, the glacier Foglefonna, and relates that there once existed a valley below the glacier. The people of the valley were so well off that they became haughty and indifferent to both God and other people alike and who were therefore punished with snow and sleet for ten consecutive weeks until the valley was covered by ice and snow.

As the texts in the manuscript reveal, noblemen often get killed in various ways. There is a story of a knight whose headless body was found in the sea. Another story is of a regional king who is killed and has his castle burned down because he stole the King of England’s daughter. A third story tells of Audun Hugleikson, who was executed after raping the king’s spouse, while escorting her from England to Norway.

Eva Wedervang-Jensen is a research assistant at the Arnamagnæan Institute.