Boasting both the earliest text of the Paternoster in Danish as well as rare musical notation, AM 76 8vo consists of a jumble of texts in both Latin and Danish. It may have been a schoolteacher's handbook - in which case the standard of education at the school cannot have been terribly high. 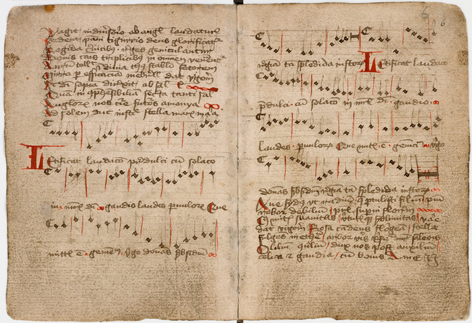 No less remarkable a feature of AM 76 8vo is the musical notation that accompanies many of the poems, both in Danish and Latin. (Click on the picture for a larger version.)

AM 76 8vo is a small and unprepossessing paper manuscript, the contents of which rarely rise above the mediocre. Among the Danish manuscripts in the Arnamagnæan Collection it is nevertheless one of those which have received the most attention.

The manuscript consists of nine quires and has a total of 142 leaves. The quires were probably first bound together long after Árni Magnússon got hold of the manuscript – at an unknown time and from an unknown source. The leaves are written in various hands in an unostentatious late medieval cursive script and, except for some rubrics, contain no ornamentation other than small vignettes which appear sporadically. Two of these are slightly larger and include inscriptions on banderoles. One of these weaves around the letter F and a crossed P. It could be an ex libris , but its meaning has not been deciphered, and the only thing certain about the manuscript’s origin is that the paper, judging by the watermarks, must date from the period 1452–1467.

A jumble of texts

The chief riddle the book presents to a modern reader, however, is what function it might originally have served. The contents are a rag-tag medley of longer and shorter texts which have apparently been added at different times and not always in a straightforward order. The texts are in both verse and prose, some in (poor) Latin, others in (better) Danish, both religious and of a secular character, but consistently unlearned.

An apocryphal narrative and encyclopedic excerpts

There is only one longer text in Latin, the legend of the childhood of Jesus, which supplements the sparse biblical accounts. Otherwise, Latin is mostly reserved for short pieces which reflect various fields of knowledge – theology, music, mathematics, geography, medicine etc., all at a very basic level.

A dialogue between a student and his master

The main text in the manuscript (ff. 32r–91v) is a free Danish reworking of the common European text Lucidarius (Light-giver). By means of a dialogue between an inquisitive student and an almost omniscient master, all medieval knowledge is presented in a popular form. The section on God contains some highly lyrical passages – possibly independent Danish additions – while the passage on the world and its inhabitants includes passages of full-on burlesque. Within the section on the mass can be found the earliest texts of the Paternoster and the Apostles’ Creed in Danish.

The Danish texts also include a collection of sermons, syvsalmen  – a translation of the seven Old Testament penitential psalms with accompanying invocations of the church’s holy figures – as well as a couple of prayers and a group of poems, among them several contributions to the common European tradition of Marian verse. Some of these are most likely original Danish compositions and are notable for the way in which the poet worships the holy virgin, as a troubadour might his lady. At one point the poet presents himself as Per Ræv Lille, but who this person may have been, or whether he was indeed the poet, is completely unknown.

No less remarkable a feature of AM 76 8vo is the musical notation that accompanies many of the poems, both in Danish and Latin. Music is otherwise rare in Old Danish manuscripts, and polyphonic music, of which there are several instances here, is completely unattested in Denmark prior to this.

The interpretation which until now at least has seemed most likely is that AM 76 8vo served as a kind of handbook for a schoolteacher in a Danish elementary school, possibly connected to the order of Franciscans. Whatever the nature of the school, it is clear that the standard of education there cannot have been terribly high. 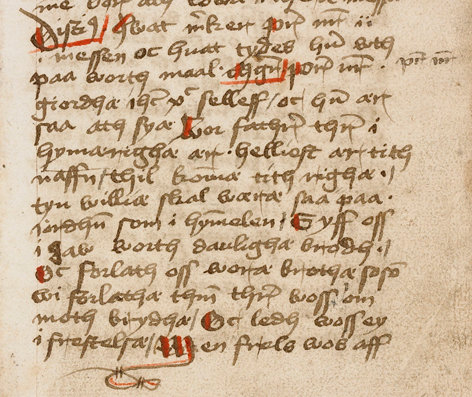 Within the section on the mass can be found the earliest texts of the Paternoster and the Apostles’ Creed in Danish. (Click on the picture for the full page.)