The labours of the month

The vignets in this calendar depict the labours of the month. The common activities for February are keeping warm and chopping woods. In AM 249 a fol. a man dries his socks beside a fire. Click on the image for a larger version.

AM 249 a fol. is a calendar produced in England sometime around 1300. Calendars had long since been used by religious communities as practical timekeeping devices, but they became progressively more decorative during the later Middle Ages. The miniature paintings in this calendar depict the Labours of the Month, common rural activities associated with certain times of year. In February a man dries his socks beside a fire, a mounted figure goes hawking in May, while men stomp grapes in September to produce fine English wine. Similar calendar pictures appear in numerous manuscripts and on monuments and tapestries all around Europe during the later medieval period.

Produced for an English Carmelite nunnery

Below each illuminated miniature is a list of saints’ feast days and other religious holidays which occur during that month. Some celebrations, such as the Feast of the Annunciation (25 March), appear in nearly all medieval calendars, but other entries varied depending upon where and when a calendar was used. AM 249 a fol. includes celebrations for King Edmund (20 November) and Richard, bishop of Chichester (3 April). These, coupled with a series of holidays related to Jerusalem, suggest that the manuscript was compiled in England by Carmelites, members of a religious order established in the twelfth century. The significance of each celebration is indicated through the use of blue (most important), red or black ink, as well as an abbreviation for the ‘grading’ following each entry.

Medieval calendars are perpetual calendars, meaning that they could be used every year without alteration. Dates are given in Roman fashion: each month has a kalends (1st), a nones (5th or 7th) and an ides (13th or 15th) from which all other dates are calculated. Such calendars were often attached to psalters, which were read during the liturgy and to commemorate feast days. The psalter formerly attached to the calendar in AM 249 a fol. survives, in part, as sections of binding used by Árni Magnússon to protect other books. Pieces of it are now preserved in the fragment collection AM Accessoria 7 and in fragments at the Icelandic National Library and National Museum of Iceland.

From England to Iceland

AM 249 a fol. probably originally belonged to the Priory of Carrow, a Carmelite nunnery near Norwich. The priory was dissolved in 1536, but the manuscript remained in England for at least a few years afterwards. The entries for St. Thomas of Canterbury on 7 July and 29 December have been erased from the calendar in compliance with a proclamation issued by King Henry VIII in 1538. Soon afterward the manuscript was taken to Iceland, possibly on a ship owned by a certain Phillip Barnarde. Phillip ran trading vessels between Yarmouth in Norfolk and Iceland, and he may have been a relative of Wyllym Barnard, an English businessman whose name is written on fol. 7r of the manuscript. In Iceland the calendar was owned by the church at Skálholt before coming into Árni Magnússon’s possession sometime during his survey of the country between 1702 and 1712. 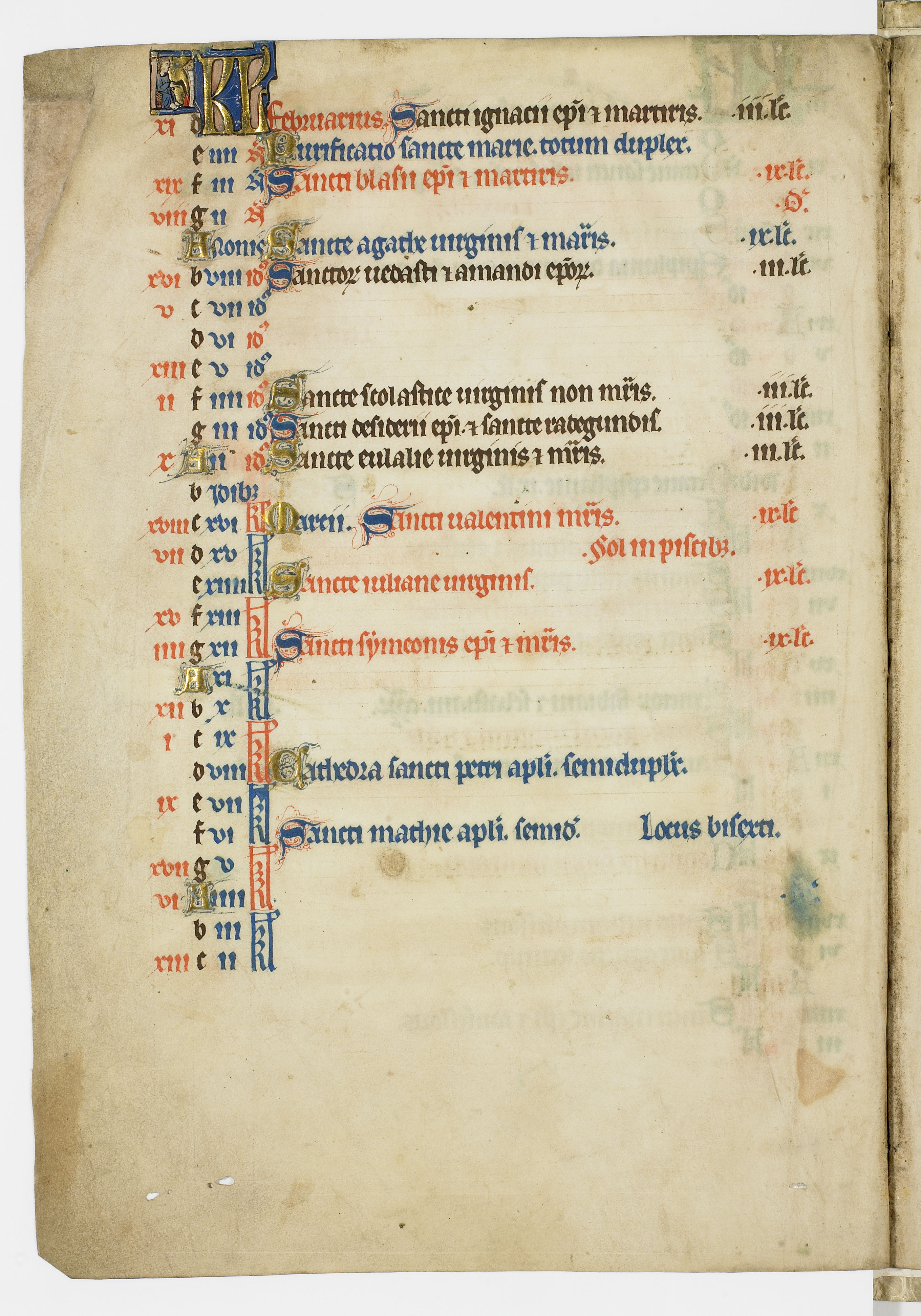 AM 249 a fol., 1 verso. February. Notice in line 14: Sancti ualentini martyris, Saint Valentine's Day. Click on the image for a larger version.