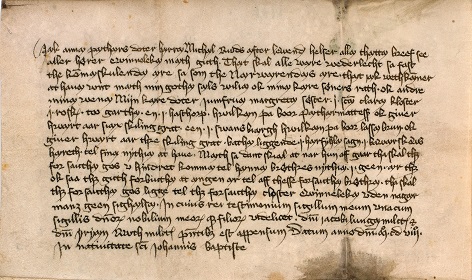 AM Dipl. Dan. Fasc. LX 22. Letter from Anna Pedersdatter to St Clara Convent in Roskilde. Click on the picture to see a larger version.

Among the many diplomas in the Arnamagnæan collection, there are three title deeds issued by the noblewoman Anna Pedersdatter, daughter of the Zealandic magnate Peder Nielsen of the Jernskæg family. Anna was married twice, first to the nobleman Oluf Lunge, who died at a young age, and then to Mikkel Rud, knight, and had children with both.

The seals
The oldest diploma is dated St. John’s day (24 June) 1408. In it, Anna transfers to her ‘dear daughter, the maiden Margrethe, sister in the Convent of St. Clara in Roskilde’ (kære datter, jomfru Margrethe, søster i Sankt Clara Kloster i Roskilde) two estates for the duration of her life. After Margrethe’s death, the estates were to go to her brothers, but if none of them were alive, they were to belong to the monastery ‘forever, without anyone’s objection’ (evindeligt uden nogen mands indsigelse). As proof of the document’s authenticity, the diploma is furnished with seals. Anna’s seal, of yellowish wax with the Jernskæg family coat of arms (a scallop shell), is attached along with that of Jakob Lunge, Anna’s son, a seal of green wax with the Lunge family coat of arms (three French lilies on a shield, two aurochs horns on a helmet); a third seal belonging to another son, Jørgen Rud, has gone missing. 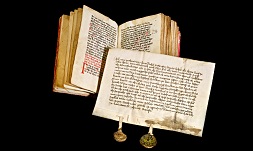 The scribe
The scribe of this diploma was attached to the convent for several years. His script can be recognised by the peculiarly s-shaped letter ‘ø’. The same scribe has also written the medicinal book AM 187 8vo (both can be seen on the picture to the right - click on it to see a bigger version).

Gifts to the convent
The next diploma, dated to the day before All Saints’ Day (1 November), is a contract for Anna’s rental of a farm in Roskilde from the convent for an annual payment of one silver mark. The last diploma, issued on the Feast of Sts. Simon and Jude (28 October) in 1432, grants the convent an uncultivated piece of land as payment for holding vigils, requiems and other ‘godly prayers’ (gudelige bønner) on behalf of Anna and her sons.

St Clara Convent
The St. Clara Convent at Roskilde was a Franciscan nunnery founded in 1256 by countess Ingerd of Regenstein. After the Reformation and the closure of such religious houses in Denmark, its buildings and properties passed to the Danish Crown, but in 1561, Frederik II transferred ownership of the convent to the University of Copenhagen. The convent’s archive subsequently became part of the University archive, and its letters, according to an archive register from 1663, were kept in the Consistory in their own drawer in  the rector’s chest.

Árni Magnússon’s copy
As a member of the university’s senate, Árni Magnússon was commissioned to organise the university’s archive in January 1716, and in December of the same year, he took home the letters from St. Clara’s Convent in order to copy them. It was registered in the senate’s documents that ‘the honourable Assessor Árni Magnússon was given, with the Senate’s permission, one drawer from the green cupboard down by the door containing 390 old letters (either all or most from St. Clara Convent), most of which are written on parchment and some on paper, which he swore to return undamaged as soon as he had read them all, along with the drawer, to the Senate’ (Veledle Hr. Assessor Arnas Magnussen uedtog med consistorii tilladelse én skuffe af det grønne skab neder ved døren med 390 gamle breve (enten alle, eller de fleeste om St. Claræ Kloster) de fleeste deraf skrefne paa pergament, og nogle paa papiir; hvilke han lovede alle uskadde, saasnart hand faaer dem igiennemseet, tillige med skuffen at restituere Consistorio). The letters were never returned, which is the reason why the single largest institutional archive, with its more than 350 letters from the years 1253 to 1590, is now part of Diplomata Danica in the Arnamagnæan Collection. It is not known what happened to the drawer. 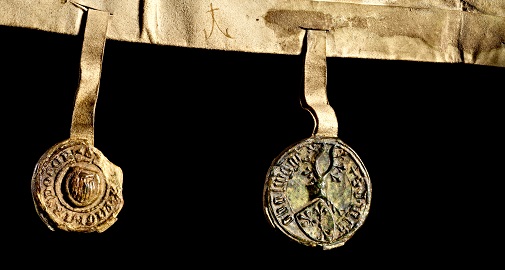 As proof of the document’s authenticity, the diploma is furnished with seals. Click to see a bigger version.

Learn more about diplomas and their use here, where you can also read about how the diploma AM Dipl. Dan. LX, 22r and the manuscript AM 187 8vo are related.